Under the Naga Tail Life Lessons From a Late Bloomer 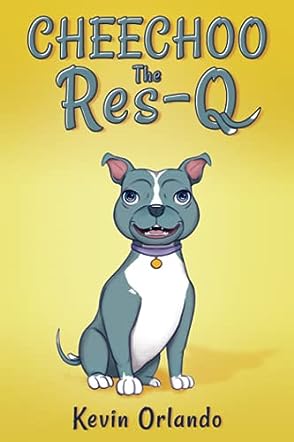 I love this quote from Chucky the squirrel: “What makes you different, is what makes you special!” More profound words have never before been spoken. We are all unique and loveable in our distinct differences. Cheechoo, a stray dog, is special because he has two tails and some rather special, mutant-like powers. All Cheechoo wants is a fur-ever home, but that’s not to be. At least, not yet. He has a human friend in Massimo, the deli owner. Massimo always finds time and treats to feed Cheechoo, but he never takes him home, he never adopts Cheechoo. And now the deli is closing, and Massimo is moving away – without Cheechoo. It’s a sad day for the stray dog with two tails. But this chirpy little fellow is quite resilient, and he knows how to make friends as he does with Chucky the squirrel. The two end up having some interesting adventures that bring Cheechoo to the attention of someone who wants him, perhaps for more nefarious reasons than Cheechoo could hope for or imagine.

Kevin Orlando’s early chapter book, Cheechoo The Res-Q, is a sweet story about a loveable, sadly unwanted, stray dog. The plot follows Cheechoo as he makes his way through the quagmire of fending for himself on the city streets. There are friendships, both with humans and other animals, and danger from all manner of living creatures, but Cheechoo stands up to it all with a perkiness that will make us marvel. Descriptive narrative is used effectively to set the stage for this story and to build the bonds that exist between humans and animals as well as between animals. The dialogue is light-hearted and sincere, helping move the story along and developing character traits and emotions as well. Most of the story is told from Cheechoo’s point of view, though the opening is from Massimo’s point of view as he faces the challenges of closing his deli and saying goodbye forever to Cheechoo. The story is tender and compassionate and with a sudden show-stopper cliff-hanger at the end, readers will be anxious to read the next book in the series.

Cheechoo the Res-Q by Kevin Orlando follows the story of Cheechoo, a stray dog, and his friends Chucky, Stooley, and Mariah. There are two plots within the story that young readers follow. The first plot centers around Cheechoo's friend, Chucky. Chucky owes an outstanding debt to Necko the cat. The debt arose from Chucky betting on pigeon races, which leads Cheechoo and the gang to formulate a plan to help Chucky out. The second plot revolves around the real villains of the story. First, there is Jacob Ravel. Ravel is your run-of-the-mill mad scientist who unethically experiments on animals for scientific gain. Second, there is Patrick Moss. Moss runs an international dogfighting operation. Ravel and Moss are, in a sense, business partners.

Cheechoo the Res-Q reminded me of old movies from my childhood, most prominently Shark Tale. Cheechoo the Res-Q is full of animal hi-jinx and fun. It also covers themes such as animal exploitation and gambling. Even as an adult, Cheechoo the Res-Q was a fun read. I can see this becoming a successful chapter book series. I would recommend this book to children between ages 8 and 12. Some of the subject matter is a little too mature for younger children and a bit too young for children older than 12. All in all, I hope to see more of Cheechoo and his animal pals.