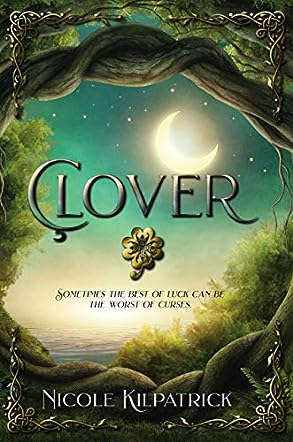 For eighteen years, Clover’s life has been close to perfect. Nothing ever goes wrong for this girl; it’s as if she’s a living good luck charm, like the four-leafed clover after which she was named. But, everything changes on her eighteenth birthday; everything she believed in and cared for suddenly takes a drastic turn, not necessarily for the better. As she grapples with this new, troubling reality, she has to come to terms with a faerie leprechaun, Finn, who has looked after her all these eighteen years. If what he says is true, a rogue faerie bent on jealous revenge is making her life almost forfeit to his treacherous plans of domination. Mix in a little bit of love and a whole lot of magic, and Clover’s life is a coming-of-age story from which legends are born.

Nicole Kilpatrick’s young adult novel, Clover, is all a fantasy novel promises. There is magic, fantastical spells (both good and evil), battles of good against evil, and a little bit of romance. The story follows two threads: Clover’s life as she turns eighteen and comes into her inheritance (such as it is), learning who she really is and what she wants out of life; and Alistair’s story, the rogue faerie who cast a spell on Clover before she was even born, holding both her and those she loves most captive in a complex, evil spell. As both stories unfold and converge, conflict ensues, and tension mounts. There are battles and adventures mixed with magic and spell-casting. As Clover learns more about herself and who she is, she matures and comes into her own as a strong female figure, one to be reckoned with. The luck of leprechauns, faeries, and pure magic, that’s what Ireland has to offer and so much more. This is a real page-turner and will capture the attention of teen readers and older readers—a very compelling and engaging read.

Clover by Nicole Kilpatrick is that magical book that grabs your attention while leaving you to hang on to every word. Nick O'Leary unknowingly gambles with a leprechaun and loses. He not only lost any luck he would ever have, but he gambled away his unborn daughter's future. The sneaky leprechaun made it look enticing; she would have good luck until she was eighteen. The trick was he got to name the unborn child, allowing a spell to be placed on her. Clover O'Leary's life had been golden until she turned eighteen. Now she's thrown into a world of mystical beings that fight over her. No one knows the power and potential of the spell. Finn has watched over Clover for these last eighteen years; can he protect her with all the unknown between them?

I found Clover to be one of the best Irish folklore novels I have read. Nicole Kilpatrick brings our favorite fairytale characters to life as they fight to possess the innocent Clover O'Leary. As the Unseelie's army trains to use her for their evil purposes, Finn introduces her to many paranormal creatures. The creative writing and fascinating plot blend the present world with a magical one. The action moves smoothly from one revealed secret to the next while the intensity builds between warring opponents. Not all are warring for Clover's life; some are battling for her heart. The characters step out of the perceived expectations, forging their unique paths. I loved that leprechauns were handsome and loyal, though you still had some who loved in excess. I highly recommend this novel to those who enjoy folklore with a touch of romance.

Clover by Nicole Kilpatrick is a glorious young adult fantasy aflame with magic, coming of age, romance, and an homage to Irish myths. Join Clover O’Leary in her adventure to take her life back and rectify matters in order to break an evil spell. It all starts when she turns eighteen. Finnegan Ryan appears in her life and introduces himself as a leprechaun—a faerie leprechaun. One of the new twists here is that Finn is contrary to what you are used to imagining; a short, unattractive creature guarding a pot of gold. Finn can assume any form he desires and he chooses to be a hottie. Everything is revealed to Clover. Her father once made a deal with a leprechaun named Alistair to give her luck for eighteen years. In exchange, her father allows Alistair to name her. In the supernatural world, to name someone is to have control over that person. Now that the deal has expired, Finn and Clover will join forces to stop Alistair from whatever devious plans he is hatching.

The Irish otherworld presented here is a fluid, ambivalent place that transcends spatial and temporal boundaries where time is perceived to have stopped, as even extinct creatures still exist. As far as a good fantasy setting is concerned, Nicole Kilpatrick has created an idealized mirror image of the human world where magic and enchantment abound. She has conjured up Irish folklore creatures and made them appear out of the pages with their distinct personalities. Garrett, the shape-shifting pooka, for example, seems devoid of any inhibitions so that he sometimes comes off as embarrassing, but he has fought side by side with Finn and they have always prevailed. Many writers are using classic myth and folklore as sources for contemporary fantasy fiction, and Kilpatrick has effectively written a page-turning plot. As a debut novel, Clover may well connect the modern youth with age-old traditional myths and put Kilpatrick on your list of new authors to watch.