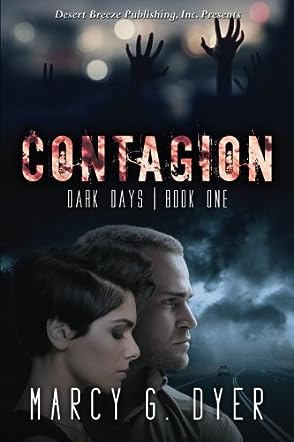 Marcy G. Dyer is a retired Registered Nurse and author. Like so many other writers, she began writing at a very young age, but never took herself seriously as a “real” writer until about ten years ago when she began taking courses and learning the craft of writing.

She currently has four novels from the Desert Winds Series available: Down & Out, Out for Blood, Blood & Lies. Lies & Alibis. The first book in the Dark Days Series: Contagion releases on July 11th. You can read the first chapter of all of her current books here.

Marcy is an alumnus of the Christian Writer’s Guild and long-time member of American Christian Fiction Writers. She hosts a small critique group for ACFW and is involved in other critique groups.

She is active in the nonprofit group, Doxa Kids. Doxa Kids provides an outreach for children in Kherson, Ukraine, and Nakuru, Kenya. She’s had the pleasure of visiting Ukraine twice and interacting with the street children there. God burdened her heart for these forgotten children when she climbed into the sewer tunnels to see where the street children live during the winter. For more information on Doxa Kids, please visit the www.doxakids.org

Marcy also hosts a blog, Gimpy Gal, that discusses autoimmune diseases. While many autoimmune diseases aren’t visible, they still cause chronic pain and disability. If you would like more information please visit the www.gimpygal.com

Contagion: Dark Days Book 1 by Marcy Dyer is the first in an apocalyptic survival series about a group of people struggling to survive after a deadly virus has been released on humanity. Yes, it’s another zombie apocalypse story, but Contagion has one major difference that sets it apart from all the others. If it were a movie, it would easily be given a PG-13 rating. That’s because Ms. Dyer’s story doesn’t focus on the blood and gore like most zombie movies would. In Contagion, the zombie attacks are described in broad terms with very little of the expected bloody details. The focus is instead on the characters and how they deal with each situation. The story follows three families who are fleeing the zombies, or infecteds as they are called in the book. There is plenty of action as the characters struggle to stay alive on their journey to reach a safe house built for the occasion. They are all headed to the same place; a fortified home with double fences and all the supplies they will need to survive.

Contagion is, for the most part, well written with a strong focus on the characters. Marcy Dyer has woven an intricate plot together to form a work of art by the time the three families arrive at the compound. The main characters, Randi and Josh, are likable and easy to root for. I’ve always been one to say an author doesn’t need to depend on violent acts to make her story appealing. It’s refreshing to see a zombie story told with such restraint. Some people may be put off by a zombie story that gives so few details about the violence of the zombies. I must admit that there were a couple of scenes in Contagion that I felt could have been fleshed out a little more to give them more emotional impact. But, Ms. Dyer easily overcomes that issue by giving us vivid descriptions of the consequences that follow as a result of the zombie attacks. This is a realistic portrayal of humans forced to cope with a world gone mad. The struggle that Contagion portrays so well is that of regular people thrown together in the worst of situations and trying to figure out how to get along with each other and survive.