Invitation to a Hanging The Dog in the Hollow Forecast of Gold and Murder by Cindy B Witty, Estelle Corke The Key to Circus-Mom Highway Raise Your Hand if This is You 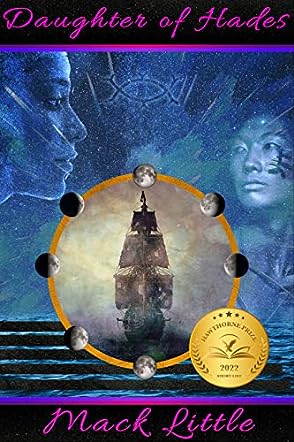 Daughter of Hades by Mack Little is a 17th-century story set in France, Jamaica, and Barbados. In Barbados, the Admiral’s son, Owen Craig, raped Geraldine Obosi, a slave. She escaped with her twin brother, Jimmie, to a pirate ship (Hades), where she met Lei. The gang of Lei, Jimmie, and Captain Duff sought retribution on Owen, taking his most prized possession. In France, Pax murdered his mother’s killer and ran to safety with his brother and friend, Ivan and Philippe. The trio also found themselves on a pirate ship (La Fortuna) that met and joined forces with Hades. However, retribution may tarry, but it must come to pass. When Geraldine found happiness, the aggrieved returned for their pound of flesh. Will she go back to being a slave? Will Geraldine’s happiness last?

Daughter of Hades by Mack Little is a tale of pain, machinations, gore, loyalty, love, honor, and survival. The story was riveting and the plot was outstanding. I want to applaud Mack for writing a very descriptive novel that awakened my imagination. Also, it hit home because the story featured my people, making me appreciate their strength, reach, will, and how far they have come. I was heartbroken, too, because slavery is evil. Even though the shackles were off their feet, I don’t think the same goes for the mental chains. This story was a cocktail of fact and fiction. Mack Little developed powerful characters, and I loved Dinny, Ami, and Ijemma, who were formidable and lethal in various aspects. Jimmie, Ivan, the brave Pax and Kossi, and the fierce Leixiang were stars. Thank you, Mack!

Daughter of Hades by Mack Little is a historical romance set in Caribbean waters during the 17th century. Dinny knew that if she wanted to survive the horrors of slavery, she and her brother had to get away from their homeland in Barbados. Desperate, Dinny embarked on a pirate ship called The Hades to chase her freedom before her owner caught up. On the other hand, we have Lei. Lei ran away from China after the Ming Dynasty fell, and he became a pirate to find a purpose and place in his life. Meeting Dinny felt like destiny, and before they knew it, they were in love. Lei vowed to protect her against every danger, and there was no power on earth that could take Dinny away from him. However, that respite was only for a while as danger was back, and it wanted to snatch Dinny away from her peaceful present. Was Lei strong enough to keep Dinny safe? Or would he lose everything once again?

I love a good romance, and this one hit the spot for me. Historical romances can be cheesy, but author Mack Little did an incredible job. Dinny’s character was smart, vulnerable, yet very courageous at the same time. Lei, on the other hand, was very sure of himself and his abilities. He was ready to fight the world for Dinny and support her regardless of whatever came her way. They had a family on The Hades, and they all supported each other. The author added multiple dimensions to the story with new characters and many twists and turns. The pace of the story was fast, but it was not too fast to give me whiplash. I had every opportunity to enjoy the story, enjoy the character development, and hold my breath in the ending scenes.

Mack Little’s Daughter of Hades is a historical romance that transcends its genre for the purity of its plot, characters, and setting. Dinny escapes from Barbados with her brother, and they board a pirate ship, The Hades. They were escaping from a life of bondage—from her owner Craig Owen who had taken her from her family to be his daughter’s pet. As they sail toward freedom, she begins to navigate her new life aboard the ship and gets to know many other people on board, some of whom have different tales. The ship inevitably leads her to meet Lei, a wanted man who turned to a life of piracy. But Lei is no simple bandit, as he merely reacts to marginalization and barriers to a better life. As they become drawn to each other and try to build a better future, Craig Owen will reclaim what is rightfully his.

Daughter of Hades does not disappoint. It touches all the bases of a great historical romance tale, with a person of color as the main protagonist, checking all the boxes of an ideal romantic heroine. Mack Little writes with rich detail and sensitivity. It isn’t much about swashbuckling action and beautiful people trading body fluids, but it focuses on the plight of people escaping slavery. The Golden Age of Piracy at the height of the Atlantic slave trade becomes a creative and inspiring source for Little to write about black people that depicts their genuine struggle. Moreover, Daughter of Hades explores not only heterosexual relationships but LGBTQ partnerships as well. No one is identified according to a specific gender type. This story has exceeded my expectations, and I highly recommend that you read it too.

Dinny was a slave in Owen Craig’s home. When Owen rapes her, Dinny manages to escape and join her twin brother, Jimmie. Jimmie has brought along a Chinese man, Lei, who leads the twins to a ship owned by Captain Duff. Dinny’s feisty nature earns her the name “The Daughter” by the crew on the ship named Hades. Captain Duff sets sail to Jamaica. Meanwhile, two brothers are on the run from Dragonmade soldiers. The younger brother, Pax, has murdered the soldier who killed his mother. Ivan and Pax join Phillipe while evading capture, and find their way to a shipping port. The trio signs contracts to be indentured servants to gain passage to the Caribbean. Captain Ford of the La Fortuna buys the boys, and they set sail for Jamaica. Mack Little composes an intricate story involving pirates, strength, and romance in Daughter of Hades.

Daughter of Hades is a fantasy that I got lost in and read in one sitting. Mack Little’s world-building allowed me to see every scene vividly. The character development was detailed enough so that the very nature of each person was believable. Dinny felt like she could have been a modern-day teenager with her need to escape from her oppressor. I couldn’t fathom the amount of fortitude it would take to learn my rapist had impregnated me, my parents are still under his control, and living in a seaside village. What I found interesting about the entire story was the way Little developed the story to coincide with historical events. I made the connection with Lei’s story of the Ming dynasty’s fall when he was on board the Hades. The relationships that form throughout the story align with the conflicts that people face in today's world. The cliffhanger ending absolutely floored me with how Dinny’s family will progress. Adult fans of pirates, romance, historical fiction, and fantasy stories will enjoy Daughter of Hades.