Two If By Sea The Three-Headed Dagger and The King's Son 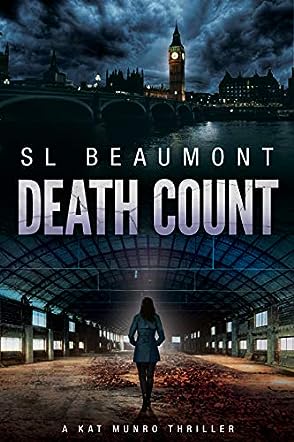 SL Beaumont is the author of the award-winning novel Shadow of Doubt and the Amazon best-selling series, The Carlswick Mysteries.

She lives in beautiful New Zealand, which is only problematic when the travel-bug bites (which it does fairly often)! Her passion for travel has seen her take many long haul flights to various parts of the world. Her love of history helps determine the destination and the places she visits are a constant source of inspiration for her.
Prior to becoming an author, SL Beaumont worked in banking in London and New York.

Shadow of Doubt won the 2020 Indie Reader Mystery/Suspense/Thriller Award, was long-listed for the 2020 Ngaio Marsh Award for Best Novel, and was a semi-finalist for both the 2019 Publisher’s Weekly BookLife Prize and the 2020 Kindle Book Awards.

When the suicide of a successful financial adviser looks suspicious, a feisty forensic accountant assists the attractive homicide detective looking for foul play in the sensational sleuth mystery Death Count (A Kat Munro Thriller) by SL Beaumont. When a security guard for a London investment firm is the victim of a fatal fall the same night one of the company's partners allegedly commits suicide, it raises a red flag for the police department. Kat Munro, a forensic accounting analyst, is contracted by the Met's Financial Crime Unit to work with DS Adam Jackson, the lead investigator. Assaulted by unknown assailants minutes after uniting forces, Kat and Adam realize that someone feels threatened by their investigation. As Kat's research exposes discrepancies in the company's financial records and Adam's inquiries ruffle feathers, the dangerous incidents increase. With the criminals expertly covering their crimes, Kat and Adam are having a difficult time proving the swindlers are guilty of murder as well as fraud. With the threat of death stalking them at every point of the investigation, can they pinpoint the culprits before one of them becomes the next victim? Or will both Kat and Adam be caught in a deadly fight for their lives?

Death Count (A Kat Munro Thriller) by SL Beaumont is a spectacular mystery novel. With engaging characters, an action-filled plot, and a thrilling storyline, this book is unputdownable. The opening prologue captured my interest, and the story did not fail my expectations. Not only are the characters engaging, but they embody human complexities that make them intriguing and relatable. The storyline moves along at a fast pace, perfectly orchestrated with the plotline, story arc, and electrifying conclusion. Skillful in using his words, the author created a mesmerizing story that drew me in at the first page and held me captive until the surprising finale. Exciting and intense, it will entertain everyone who relishes suspenseful and thrilling murder mysteries.