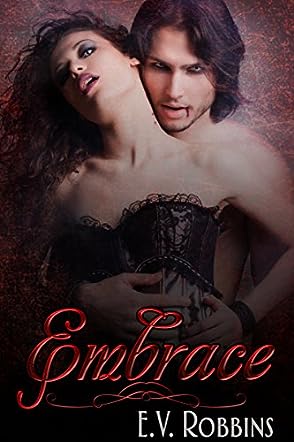 I have always loved vampire stories, but have grown somewhat disappointed it the movie models of the past. So here, I have broken many of the old rules to take this story in a new direction. There are messages hidden within the text. There are twist and turns to be discovered. There is a new world of vampires to be discovered. I have to thank some of my friends who have encouraged me to write this series. As a way to thank them, I have made some of them the characters in this story to immortalizing them in this book. I hope you will find The Judas Chronicles as fascinating as I did as it came to life on these pages. As Embrace came to an end, I just couldn't stop. Hopefully, you will want to read the whole story as told in "Turning" and then the "Unknown".

Embrace by E.V. Robbins is a paranormal romance about fighting against a nightmarish creature hell-bent on murdering the world, while searching for the edge between salvation and damnation. Racy is a young woman who lives a simple life, dealing with her insufferable boss while contentedly spending time with her friends. However, that changes when she stumbles across a body in a co-worker’s house, then finds the same woman alive and well. When her friend, Cynthia, disappears one night, Racy is determined to find her, but meets the mysterious Stephen instead, a vampire who introduces her to the horrifying war between the Iscariots and the Kindred. With the body count slowly rising, Racy decides to learn how to fight against the Kindred in order to protect herself.

While making out with a vampire you just met might not seem like the best idea, I liked watching Racy in action. She’s a sensible character who wises up fast and learns how to become a bigger threat to the Kindred. She also cares for her friends, so much so that she is willing to put herself at risk for their sakes, something I can relate to. Stephen, meanwhile, is a bit more isolated than Racy is. Although he shows much more maturity than her, I have to say I wasn’t as interested in reading about him as I was in reading about the world surrounding him. Personally, I didn’t think the relationship between the two was necessarily bad, but I did feel like it was rushed. Nonetheless, they were enjoyable to read about. I especially loved the idea of the Iscariots and the Kindred fighting. The two groups introduce a certain sanctity that I haven’t read in any other book. The concept of seeking out redemption when you don’t know if it’s possible is also interesting. In real life, a lot of people keep saying how humanity is evil, that we keep screwing things over if it will benefit our needs. However, clearly the monsters think differently; no matter what, human life is sacred, both adult and child.

Great story! I love this!