Prick of the Needle by Regina A Byrom 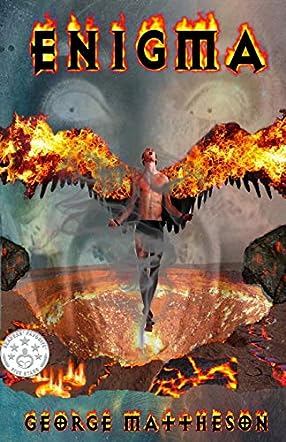 George Mattheson was born in Georgetown, Guyana, and he grew up in Trinidad and Tobago and the United States. He holds an associate’s degree in electronics engineering, a bachelor’s degree in information technology and a master’s degree in global technology management. Mattheson, who lives in Converse, Texas, was diagnosed with schizophrenia in 2002. He was diagnosed with schizophrenia and bipolar disorder at the age of 27. He has supplied intelligence to the CIA since he was 17 years old, but never worked for the agency professionally.

Enigma by George Mattheson is a novel about the psychology of a schizophrenic character who never liked to study as a child and who never read any books. He confesses that he has never been able to watch the television for more than two hours. But he believes to have a kind of communication with Michael, an Archangel. This is a man who believes the CIA is God and Washington, DC, the Church of God. But can this son of intelligence operatives figure out who Michael actually is? What is the hidden import in his reminiscences and wild assumptions?

George Mattheson has written a psychologically strong novel that allows readers to explore the mind of a schizophrenic individual, understand how reality can be distorted, and what happens when someone lives in their own world. The novel has a deep sense of pathos and from the moment the protagonist — who happens to be the narrator — mentions about being transferred from one psychologist to another, the reader gets a strong idea they won’t be reading anything like in mainstream literature.

This is a unique narrative, breezy and as engaging as it is fast-paced. The quirkiness in the narrative is arresting and the first person voice is so beautifully done that it pulls the reader into the worldview of the protagonist powerfully, irresistibly. From the beginning of the story I wondered if the author could tell an interesting story, but as I read from one engaging page to the next, I understood the story is filled with dread truths and lessons that aren’t obvious. Enigma is a deceptively simple story but it has strong political and religious undertones, uncovering a subconscious that contemporary politicians wouldn’t want readers to awaken. It is utterly gripping, written in gorgeous prose and a strong narrative voice.

Enigma by George Mattheson is George’s true story of his battle with schizophrenia and his conversations with God. George doesn’t pray; he talks to God through the Archangel Michael. Born to Intelligence Operatives, by the time he is 27, George has been diagnosed with both schizophrenia and Bipolar Disorder and he doesn’t always know who Michael is. Could he be a CIA operative? After all, the CIA is God and the Church of God is Washington DC – isn’t it? Despite everything, George had a goal in life and he went after it. He got his Master’s Degree and he even went to work for the CIA as an Intelligence Operative. He even lived for a time in Trinidad and Tobago, proving to one and all that life is to be lived, no matter what gets thrown at you.

Enigma by George Mattheson is an odd story, part truth and part fiction, although the fiction is what George sees in his dreams and his visions, in his memories. It is written almost as a fictional novel in a first person narrative and is in the format of a diary. It is strange but it is also quite compelling reading, very interesting once you get into it. Each event is written like a short story so they are separated and that, in my opinion, does make this more readable. I enjoyed the style that the book was written in; it was easy to follow and made perfect sense. George is nothing if not honest and has coped with what life has thrown at him incredibly well – there’s a lot that could be learned from this book. Overall, it is a good book, very well written and down to earth.

George Mattheson's Enigma: Born as the Hand of God is a unique memoir that will leave its readers grappling between truth and fiction. As the son of the only licensed sea captain in Trinidad, with a mother of East Indian descent, Mattheson leads an extraordinary life. At the age of six, he began talking to Archangel Michael and was later diagnosed with schizophrenia and bipolar disorder when he was twenty-seven years old. Amazingly, he has provided intelligence to the CIA since he was seventeen years old, although he has never worked for the agency in a professional capacity. Enigmatic, vivid and original, Enigma is an extraordinary life story as we get a glimpse of a complex but a beautiful mind.

Enigma: Born as the Hand of God by George Mattheson is an intriguing memoir of a diagnosed Schizophrenic who claims he talks to God through Archangel Michael. Born in Georgetown, Guyana, George Mattheson grew up in Trinidad, Tobago and the United States of America and finally settled in Converse, Texas. This is an extraordinary story that blurs the line between reality and visual and auditory hallucination. The story starts as he undergoes hypnosis supervised by a therapist, and as such this thought-inducing memoir unravels. His early childhood is certainly unique but it is quite an effort to separate truth and visions. And as we follow Mattheson in his life journey, we get a glimpse of an extraordinary man, even if we cannot decipher the hidden meaning behind the enigma.