Of Body and Bone Wisdom From The World's Greatest Gurus Ethan Murphy and the Race for the Incan Crown 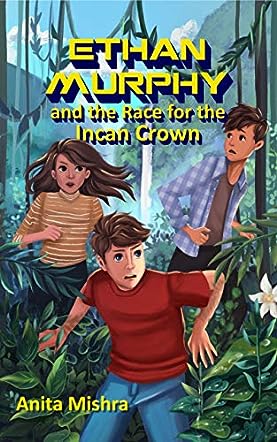 Thirteen-year-old Ethan Murphy is a wiz at riddles and puzzles. After a successful introduction to the ROM Agency (Riddles of Macrocosm Agency) and reunited with his grandfather, ROM’s manager, Ethan completes his first case and decides to stay on and become a fully-fledged agent like his father had been before his abduction. He settles into his new office, which was once his father’s office, and spends his time studying the cases his father was working on. But, when his office is ransacked, his world is turned upside down. One of his father’s cases, to find the missing Incan crown, is the mystery behind the upheaval. Ethan, along with his friends and agent colleagues, Grace and Steve, is set to solve the riddles and solve the mystery, intent on finding the crown before evil forces can claim it for their own financial prosperity.

Anita Mishra’s Middle-Grade novel, Ethan Murphy and the Race for the Incan Crown, is the second book in the Ethan Murphy series. Like the first book, this one certainly doesn’t disappoint. This is a well-constructed plot, packed with adventure, good friendships, good collaborative skills, and page-turning thrilling action. The reader won’t want to put it down till the very end. The characters are well developed and believable and the dialogue helps drive the plot forward while allowing the reader to get a true sense of who the key characters really are. There is interesting historical information about the ancient Incan civilization, and the underlying plot of following a treasure hunt certainly adds to the story’s attraction. Mystery, intrigue, riddles, puzzles, and secret agents, what more could a young reader ask for? A great read.