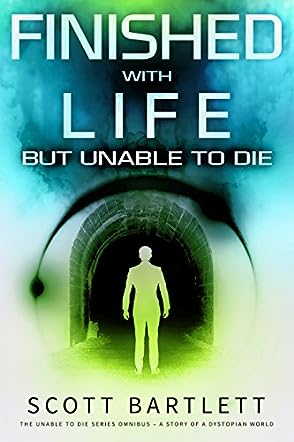 Scott Bartlett was born in St. John’s, Newfoundland, where he lives. He is a fiction author who mostly writes science fiction nowadays, though he’s dabbled in humor and literary fiction.

Scott recently caught the sci-fi bug, and he’s writing new novels at light speed. He especially enjoys writing dystopian sci-fi. Expect releases from him soon in two brand new series. To get an email whenever the author releases a new title, sign up for the VIP newsletter by clicking this link: ScottPlots.com

Michael Haynes was 91 and he wanted to die. When told he had lung cancer, he welcomed the news. His wife died ten years ago and his grandchildren were mostly grown. Dying, with all his family around him, he said his goodbyes and descended into darkness. When he woke, he was told the cancer was gone, cured through a radical new technique. Normally, the cure would not be used on a 91-year-old man, but if it succeeded, then everyone could expect to have a prolonged life. Michael was shattered. He was resigned to death and wanted to see his wife. Now, his children had robbed him of that, but he couldn’t very well say that to them. Then came his 100th birthday party. The radical procedure that cured him didn’t help most other patients, but somehow it worked for him and everyone wanted to know why. The government kept pestering him to take tests, but Michael refused. Because he is denying others the prospect of extended life, the government labels him a terrorist with devastating consequences for him.

In Finished With Life, Scott Bartlett provides a well-crafted short novella that has a clear theme, character development, some drama and enticing concepts. It is an easy to read story, drawing me into Michael’s life, his struggle with longevity, unraveling terrible secrets that have torn his family apart, overshadowed by machinations to find out why he continues to remain alive. Just when I expected everything to be revealed and explained, Scott Bartlett draws the story to a close! If I want to know more, I must get the second book in the Unable to Die series. If you are prepared to overcome your pique, you will find Finished With Life an interesting read.