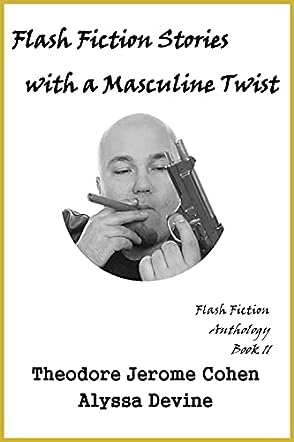 Eclecticism, compassion, and nostalgia are the veins of Theodore Jerome Cohen's Flash Fiction Stories with a Masculine Twist (Flash Fiction Anthology, Book 11) which also includes his works under the pen name Alyssa Devine. The characters consist of fictional historical figures and real people navigating through myriads of experiences and emotions. In 'Cards', two men are trying to cheat each other until one of them purposely gives his opponent the Dead Man’s Hand. The Mafia is one of the recurring themes in the collection with 'Capone' and 'Brando'. A mobster and a couple of detectives are having a battle of wills in 'Waiting', and the detectives are losing to the Don. In 'Compass', a man remembers a schoolmate, Tony, a gifted baseball player before he lost his way, joined the mob, and eventually got his deserved punishment. The elaborated version of the story, 'A Dying Breed', is included. By contrast, some mobsters still have a sense of loyalty and gratitude as a Godfather reciprocates his childhood friend’s help by donating generously to an orphanage.

'Unforgiven' is one of my favorites, where a son is fulfilling his late father’s wish to reconnect with his WW2 platoon sergeant and convey his last message. When he finds him, the son learns more about his father’s war experience and the reason their relationship was estranged. Inspired and adapted from Cohen’s mystery thriller Eighth Circle: A Special Place in Hell, it’s an intriguing and slightly tragic story, balancing the heroism with the terror of battle, and the consequences of war to familial bond. It's not all melancholy and grim; several funny tales such as 'Barber Shop' will definitely entertain readers and live up to the anthology's wide-ranging themes. Sixty-two stories of loss, friendship, love, war, organized crime, family, the old Wild West, jazz, Frank Sinatra, Bonnie and Clyde, and more - Theodore Jerome Cohen's Flash Fiction Anthology is among a few that achieve the brilliant range and diversity of voices in its genre.

Savor bite-sized stories in the moving anthology, Flash Fiction Stories with a Masculine Twist by Theodore Jerome Cohen and Alyssa Divine. Take a brief peek into the lives of some of the most influential people in American history and view small pieces of the past. With striking images to further stimulate the imagination, each story is succinctly written, engaging the reader, and evoking the desired emotion for the story. Included are stories about Bonnie and Clyde, Elvis Presley, Marlon Brando, Frank Sinatra, plus some poignant slices of life during the Depression, World War Two, and the Viet Nam war. Dive in and be transported to another place and time.

Tantalizing and heartwarming, Flash Fiction Stories with a Masculine Twist by Theodore Jerome Cohen and Alyssa Divine is a collection of award-winning stories certain to entertain readers of all ages. I appreciated how the author, Mr. Cohen, honors those of the past while preserving their stories. It's a beautiful tribute to fallen heroes, the firefighters of 9/11, and those that built our country into what it is today. Mr. Cohen is a multi-award-winning writer of over ten novels, multiple short stories, and has experience as a CBS Radio Station News Service Commentator, Antarctic explorer, scientist, engineer, and private investigator. His many experiences shine through his work, breathing life into his stories. Included are stories from his young adult pen-name, Alyssa Divine, giving this book a delightful mix of masculine short stories and a few larger pieces that are sure to draw the reader in from the beginning to the very end.

Flash Fiction Stories with a Masculine Twist is a collection of 62 stories that explore different aspects of manhood: war, crime, imprisonment, drug cartels, fatherhood, memories of the deceased, friendship, infidelity, gambling, and more. Each narrative has a picture that hints to readers what it's about. One story depicts a man who is haunted by ghosts from his past and memories about a war buddy he lost in Iraq. Another tale portrays a discussion between two colleagues, with one of them mentioning their fear of getting up a ladder at home. Many of the narratives in Theodore Jerome Cohen's tenth collection of flash fiction are 250 words or less and are inspired by interesting or unusual photographs found on the Internet.

I agree with Theodore Jerome Cohen's statement: "They're best savored in small helpings." The stories are not only in the texts but also in my thoughts and imagination about the environments and characters while and after reading them. In fact, the slam-bang endings gave me a new perspective of the narratives, and I would reflect on what I had previously read from a different perspective after reading the last sentences. My favorite story, which was inspired by a true event, is about a student with an unknown medical condition and the compassionate acts by the entire class. Apart from heartwarming stories such as this, some stories are structured like jokes and others portray a serious theme centered on a male character. If you love short narratives that tug at your heartstrings, make you laugh, and give you several concepts to think about and get lost in, you would enjoy Flash Fiction Stories with a Masculine Twist.