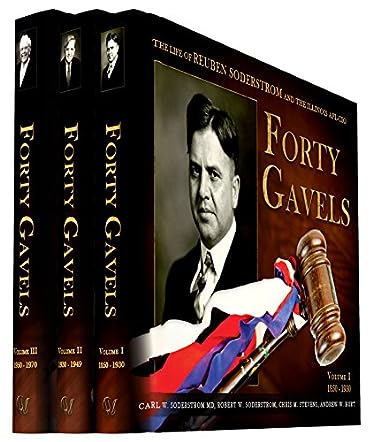 For anyone interested in biographies or history in general, or the American labor movement in particular, the three-volume set of Forty Gavels: The Life of Reuben Soderstrom and the Illinois AFL-CIO is an enticing read. Co-authored by Carl W. Soderstrom Jr. MD, Robert W. Soderstrom, Chris M. Stevens, and Andrew W. Burt, the volumes cover Reuben George Soderstrom’s (1888 – 1970) life, from his harsh experience as a child laborer; to his activities during the Depression, World War II, and recovery; to his rise to positions of local, state, and national influence and leadership. This is a quintessentially American story in which a son of immigrants becomes a voice heard by presidents, a voice that advocates for the safety, compensation, rights, opportunity, and welfare of millions of American workers and their families.

Beautifully narrated, lavishly illustrated, and impressively documented, Forty Gavels is much more than a mere biography. It’s a vibrant history lesson and the story of principles, struggles, and achievements that we should remember. The further we move from those turbulent decades in our nation’s history, the easier it is to forget how we obtained the workplace rights and protections that we take for granted today. As I read Reuben’s story, I saw it all unfold before me and I couldn’t help but admire his tenacity, fortitude, moral courage, and conviction.

“The most difficult struggle of all is to attain control over one’s self,” Reuben wrote. “The employers of labor... seem to find it easier to sidestep the mental and physical effort necessary to establish control over selfishness and greed... The whole world is suffering... because of its failure to establish control over greed.” His observation is, unfortunately, as timely now as it was then. The authors have produced a highly engaging and informative work that brings Reuben and his times to life. This is a book that any reader will relish. Highly recommended.