Badass Pix with a Cheap-Ass Camera 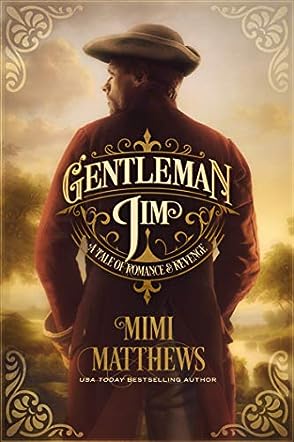 Gentleman Jim by Mimi Matthews awakens your soul to the enduring power of love. In the rural rolling hills of historical Somerset, England, two young people fall in love. One, a stable groom, rumored to be the illegitimate son of the notorious Gentleman Jim, and the other, the future heiress of Beasley Park Estate. Margaret Honeywell and Nicholas Seaton grew up together, becoming best friends and soul mates. Maggie’s father has arranged her marriage to Frederick Burton-Smythe. Fred is jealous of young Nicholas. One day in a fit of anger, Fred accuses Nicholas of a crime, severely beats him, and then locks him up. Maggie helps Nicholas to escape, and he pleads with her to wait for him. Years pass and Nicholas does not return. Time is running out for Maggie; if she wants to keep her family’s beloved Beasley Park, she must marry Fred. In an attempt to put off the inevitable, Maggie travels to London to visit her dear friend, Jane. While staying with Jane, Maggie meets the handsome grandson of the Earl of Allendale. Could it be? No, it can’t be. Yet, her heart says otherwise. Could St. Claire, the Viscount of Allendale, really be Nicholas?

Gentleman Jim by Mimi Matthews is equally passionate and powerful. Set in the early 1800s, the reader is thrust into the realm of English aristocracy. A time when social status reigned and ruled family lines and legitimacy meant everything. It was a man’s world, yet not every man was deemed worthy. Penned into the narrative are duels, elegant balls, dimly-lit taverns, and beautiful scenic landscapes. However, at the core of these vivid illustrations lie heartbreak and dark secrets. The cast of characters is intricately placed within the historical setting. Opposition and power struggles are evident as the characters collide into each other, creating simultaneous conflicts: man against man, man versus woman, man versus fate, man against society. However, it is the battle of identity that speaks the loudest within the arena of multiple conflicts. Each character, whether intentionally or hidden below the surface, strives to prove their self-worth. As the story unfolds, threads of love are woven into each sentence. Yet, with the turn of the page, there seems to be an unraveling as romance surrenders to revenge. This writing technique creates an engaging ebb and flow within the plot action. Although you are hopeful, you are never quite certain of the outcome. Mimi Matthews proves once again that she is a master of historical fiction in Gentleman Jim.