Before the Fortress Falls

by A L Sowards 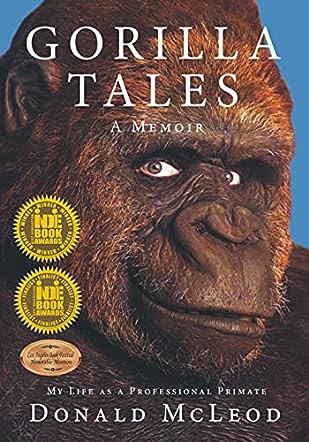 Gorilla Tales: My Life as a Professional Primate by Donald McLeod is an award-winning, riveting, funny memoir about a Hollywood actor who's played gorillas in some of the biggest movies in recent memory. Maybe you've never thought of it, but someone is inside those ape suits you see in films like "Trading Places," and this is the man and his story. Besides spotlighting his career as a Hollywood gorilla, he gives you the backstory of his childhood. His $35,000 gorilla costume led him into a slow but steady climb to stardom. If you're looking for a career in the film industry or want a book with a pleasant and humorous change of pace, keep reading.

McLeod writes a witty and intriguing account of how he stumbled into a Hollywood career, using anecdotes and storytelling skills. Some of the movies he's aped for include "The Man with Two Brains," "Tanya's Island," "The Howling," and the American Tourister gorilla in their long-running luggage commercials. His chapters are funny for sure, but you can also recognize the hand of a good writer, with vivid imagery, textural descriptions, and points creatively made. He makes memoirs enjoyable, and at times poignant as he recounts his early school years of being bullied, being the class clown, and dreaming of being a pro baseball player (which would have happened if he had been taller.) That closed door opened a window of opportunity to his second love, acting. Can you imagine the reaction you would get if you innocently wore a realistic gorilla suit in public: into a convenience store, through a mall, or across a parking lot? You can see where his mime skills come into play. The story of when he first suits up for a role is exciting and informative, and the anecdote of a man named Vinny who swears he can get McLeod a 'real' gorilla on the cheap to use for a suit - because he knows a guy who knows a guy - will have you laughing out loud. If you like behind-the-scenes stories of Hollywood machinations, images included, you'll love Gorilla Tales: My Life as a Professional Primate by Donald McLeod.