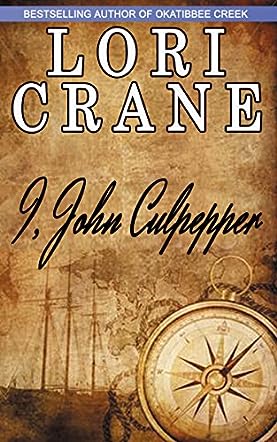 BESTSELLING AND AWARD-WINNING AUTHOR LORI CRANE IS A WRITER OF SOUTHERN HISTORICAL FICTION AND THE OCCASIONAL THRILLER. Her books have climbed to the Kindle Top 100 lists many times, including her book "Elly Hays" which debuted at #1 in Native American stories. She has also enjoyed a place among her peers in the Top 100 historical fiction authors on Amazon, climbing to #23. She is a native Mississippi belle currently residing in greater Nashville. She is a professional musician by night - an indie author by day.

In I, John Culpepper by Lori Crane, John Culpepper had a lot of responsibilities and obligations to uphold. He was born into an enormously wealthy family. Growing up in an English manor was fun, he never wanted for anything in his life. But there are a lot of expectations and pressure from his stately family. They want him to become a lawyer, join parliament, serve the country, and retire as an esteemed country man when the time comes. However, this is not what he desires to do with his life.

He has a dream of one day captaining a ship and sailing it across the wide seas and oceans. He longed for the feel of the ocean breeze on his face, the taste of the salty water on his lips, and the excitement of what the undiscovered world had to offer. He loves his parents very much, and there is nothing he would not do for them, but he loves the ocean as well. When push comes to shove, he would have to choose between the money and the comforts of wealth, or his desire and following his dreams.

In I, John Culpepper, you will be transported back to the time John lived and you will feel like you are a part of John’s life. The experience of reading this book was out of this world. Granted, there are few too many characters in the novel and the reader has to concentrate to remember who is who, but once you get into the story, it is a magical experience and you will not want to miss it for anything! Amazing! I'm awed by what I read. Kudos!