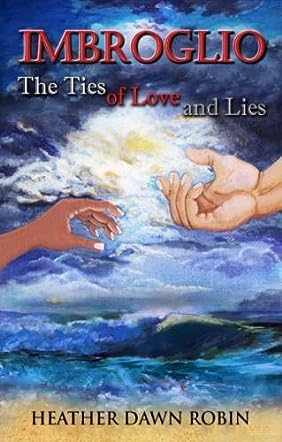 Heather Dawn Robin knows a little about the arts and entertainment industry. A producer of two multi-award–winning feature films and several short films, and a director of live concerts and trade shows, she enjoys seeing creativity through to completion. Some folks say she has vocal talent, and it has given her the honor to sing praise and worship around the world and contribute background vocals for renowned artists. Preferring not to steal anyone’s glory, however, she’s mainly found providing behind-the–scenes technical operations for live sporting events and award shows.

Despite the blessing of finding success in the above accomplishments, a long-held vision resurfaced, catapulting Heather Dawn Robin onto a literary path to bring readers engaging stories stamped with her signature delivery. She holds a degree in Speech Communications and another in Digital Media Arts, as well as a self-awarded certificate of persistence and determination. In the rays of Southern California, for which she is a native, she faithfully follows the light of Jesus Christ and runs after one amazingly energized, brilliant son.

Imbroglio: The Ties of Love and Lies is a romance novel written by Heather Dawn Robin. After yet another explosive argument with her girlfriend, Gina, Shannon gladly drives her to the airport. She not only wants to make sure Gina doesn’t miss her flight, but also looks forward to some alone time. As Shannon is leaving the airport, a man emerges from the limousine in front of her and brazenly asks for her telephone number. So begins the unusual courtship of rich businessman, Carlos Antonio Romero, and openly gay policewoman, Shannon Moore, who tells herself many times that she is not interested in anything sexual with any man. When they fall into bed together, however, the rumor mill starts churning and Carlos gets word that Shannon is a lesbian detective who is working undercover, investigating him for reasons unknown. Carlos arrives at Shannon’s home after Gina’s return and overhears their latest fight, before being confronted by Gina and taking her lies as gospel. With Carlos having become jaded and bitter, he makes it his mission to crush the soul of the woman who’d fallen in love with him. Shannon finds sudden roadblocks in both her work and personal life, and is forced to start over again while reassessing and rediscovering who she really is. Some shocking news and an unexpected arrival seal her fate, however, turning her whole world upside down and placing her in more danger than she ever thought imaginable.

What a masterfully-written tale of love, obsession and deceit! Heather Dawn Robin’s story of two people from completely different classes and different sexualities falling in love was definitely a first of its kind for me. Watching one become unhinged and putting the other’s life at risk is all too familiar and, as a survivor of domestic violence, I found myself cringing many times, while unable to stop reading as the drama unfolded. Imbroglio: The Ties of Love and Lies shows exactly what happens when love and hate collide, creating a deadly cocktail of overwhelming emotions which intersect from all directions. While I do enjoy stories with a happily ever after, I dreaded how this toxic love story would end, with one honest person being surrounded by so many who thrive on deception in order to achieve their own desired outcome.

I was very excited that the book was left open in such a way that a sequel can be written to continue the story, as well as possibly answering any questions that the reader might have after reaching the end of the novel. The English translations of Spanish dialect used throughout the tale were also immensely appreciated, as they helped me to understand the text in its entirety. I thoroughly enjoyed Imbroglio: The Ties of Love and Lies and recommend it to those who like mystery, suspense, drama, intrigue and action wrapped around a high quality romantic thriller.

5 STARS from READERS FAVORITE!!! I am thrilled, honored, and humbled all at the same time. Thank you to the reviewer, Rozie Malezar, for her honest consideration and well-crafted summation of my story. What joyous news!