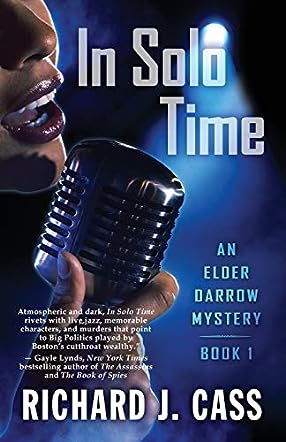 In Solo Time: An Elder Darrow Mystery is a murder mystery novel written by Richard Cass. This novel is the prequel to the first book in this series, Solo Act. The Esposito had finally gotten to the point where Elder was starting to feel as though he could make it happen. He had bought into the rather down-at-heel bar with the best of intentions. The Esposito might just help him survive his addiction to alcohol for another decade or so, and he had dreams of making it into a jazz bar that would have people lined up out in the street. He had been mulling over the crazy events of the night before, including the drunken hecklers who were demanding bluegrass out of the jazz trio Elder had hired for the night, and his cook’s bitter argument with Timmy McGuire, the blind guitarist who had been quick to flash a knife in the face of the more obnoxious heckler, when he noticed the marks on the latch of the bar’s steel door. As he went to open it, he carefully avoided the dried blood he noticed smeared on the handle. Elder had figured it was probably a drunk who had decided to sleep it off in the comfort of the Esposito, and, when he saw the man’s foot peeking out off the small stage, he told his guest it was time to go. Timmy McGuire wasn’t going anywhere, however, as Elder realized when he saw the bone-handled knife which had been planted in the musician’s chest. McGuire wasn’t all that big a loss, character-wise, but Elder couldn’t help but wonder what the impact of his murder would have on the Esposito and its tenuous grip on survival and success.

Richard Cass’s murder mystery novel, In Solo Time: An Elder Darrow Mystery, introduces an amateur sleuth who had every reason to want to see the murder of Timmy McGuire solved. Even if the man hadn’t actually been killed on the premises, the fact of his body being discovered at the Esposito automatically left both Elder Darrow and his chef and former lover, Jacquie Robillard, in the cross-hairs of Boston Police Department’s Homicide Detective, Dan Burton. Burton was inscrutable and apt to ask somewhat circuitous yet probing questions which did little to put Elder Darrow’s mind at ease. Cass’s Elder Darrow is an inspired throwback to the noir heroes of yesteryear. He can take an awful lot of booze and abuse and still maintain control over his body, but his youth and his trust fund have dwindled over the years, leaving this one last opportunity to turn it all around. The author spins a tale that evokes smoky rooms and endless bottles of single malt scotch, and it has a gritty, hard-boiled flavor that works quite well. I particularly enjoyed seeing the unlikely friendship between Burton and Darrow develop, and found the author’s mystery original and not at all that easy to solve. In Solo Time: An Elder Darrow Mystery is most highly recommended.