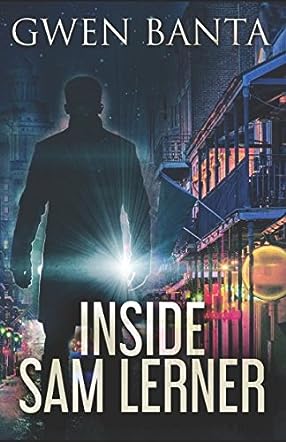 Born in Binghamton, NY, Gwen Banta received B.A. and M.S. degrees from Butler University and earned a language certification from The Defense Language Institute in Monterey, California. Her first novel, “The Fly Strip,” is a coming-of-age story set against the backdrop of the racial and social unrest of rural Indiana in 1960. Filled with humor as well as pathos, “The Fly Strip,” published in 2016, has received great critical acclaim. The author's newest release, "Inside Sam Lerner," was inspired by her love for the City of New Orleans, its history, and the vibrant people who reside there.

The author has received numerous awards for her fiction, including the Opus Magnum Discovery Award for New Literature-Honorable Mention. She is the winner in the Unpublished Stories category in multiple book festivals throughout the nation and abroad: Great Northwest Book Festival, Los Angeles Book Festival, Pacific Rim Book Festival, San Francisco Book Festival, and the Great Southeast Book Festival. The author has also written several screenplays and has placed in the Writer’s Project, Columbine International Screenwriting Competition, Ohio Film Festival and the People’s Pilot project.

An award-winning actress of stage, screen, and television, Gwen is a member of SAG-AFTRA and Equity. When not writing, Gwen is a top producing real estate specialist for Sotheby’s International Realty, where she represents many major musicians. Gwen resides in Los Angeles with her dog, Buddy, who is a major fan of all her books.

Sam Lerner tries to return to the comfort of his roots after the death of his wife, but finds that things are not always what you remember in Inside Sam Lerner by Gwen Banta. Depending more and more on alcohol to ease his pain, Sam looks for companionship and understanding at Maire Girod’s Gentleman’s Club, the place and women that represented a haven for him as a teenager. Instead, Sam finds himself drawn into a mystery that promises to turn his world upside down as he puts decisions about his future on hold.

Trying to help his old friend, New Orleans Police Captain Leon Duval, Sam keeps an eye on the mother of a missing escort. As other girls are threatened and Sam uncovers strange coincidences, the case becomes all-consuming, turning into something much deeper and darker than Sam could have imagined. Sam follows leads, hunches and voodoo readings through the Vieux Carré, cemeteries, bayous and hidden away clubs to try to get to the truth and find out not only what is actually going on, but who is behind it all.

Inside Sam Lerner pulls you quickly into the angst and sorrow that darken Sam’s soul and lets you feel his hope for salvation by returning to his hometown, New Orleans. The plot is deep and full of colorful details, twists and surprises, leading you to experience the action as if you are riding along with Sam. Great writing, and the intrigue of New Orleans and deep psychological drama make Inside Sam Lerner a must-read. Great story! Well done and a delight to read.

Inside Sam Lerner by Gwen Banta is the kind of novel for readers who love psychologically rich crime stories. Former Los Angeles homicide detective Sam Lerner is a wounded man who would have loved to forget the past, but it won’t forget him. Unable to deal with the grief of his wife’s death, Sam moves back to New Orleans where he’d stay in the Gentleman’s Club, an escort service owned by his friend. He becomes an alcoholic in an effort to deal with his wife’s death. He builds a friendship with a young escort, a Creole called Madsen Cassaise, who seems to care about him. Things start going wrong when he is informed of Madsen’s drowning. But then other escorts start disappearing and Sam’s old detective instincts come alive. He gets involved in an investigation which will uncover stunning facts, including false death certificates and missing corpses. Follow this tale of crime to the startling criminal world that Sam will discover. And who is the mastermind behind all this?

Gwen Banta writes beautifully and I enjoyed the confidence that flows through her writing, the appropriateness when it comes to word choice, the diction, and the vivid descriptions that capture gestures and images and allow readers great insights into the setting. The plot is complex enough to keep readers intrigued as they follow the protagonist through unusual places in search of clues. Inside Sam Lerner features very compelling characters and readers will enjoy the protagonist, a character that enables readers to understand the anatomy of grief. It’s an entertaining and engrossing crime fiction novel.