Who Am I? My Story and Philosophies In the Skull Palace and Other Stories 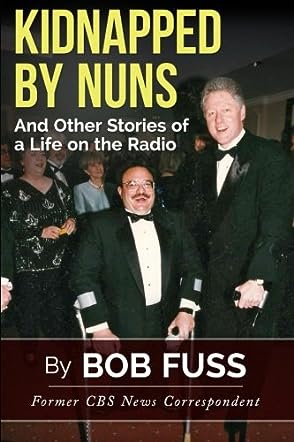 Bob Fuss graduated from Stanford University at 19 and immediately began covering the Patty Hearst kidnapping moving on to four decades of stories from the Academy Awards to national politics.
He worked for UPI Radio, Mutual and NBC Radio and retired as a CBS News Correspondent in 2014. He loves to travel for work and pleasure and has visited all 50 states and more than 70 other countries.
He was honored in 2015 with the Career Achievement Award for distinguished reporting on Congress from the Radio and Television Correspondents Association in Washington DC.

In Kidnapped By Nuns, Bob Fuss talks of his days at Stanford, that
when he joined, his intention was to become a lawyer. But his association with freshman Pete Williams, who later went on to become a much acclaimed NBC News correspondent, changed all that. He was attracted to journalism and the first story he did, the kidnapping of Patty Hearst and her subsequent conversion to the beliefs and radicalism of her captors, became a big hit. This and many other stories, like how his favorite movie failed to win an Oscar, make this a rich memoir. He recounts his struggles to find a suitable job in the years before America’s Disability Act was put in place. His quest for adventures proves that “disability” need not be a factor to limit one's job performance. Who can think otherwise, especially after reading the last story of this book: snorkeling on the world’s second biggest tropical reef!

Kidnapped By Nuns by Bob Fuss shows the author as a compassionate, fun
loving and astute journalist. The extraordinary life lived by Bob Fuss
can be clearly seen in these pages. He has witnessed many an incident of fury, like natural disasters, military coups, cults, assassinations, sports events, political conventions, and has produced some very enjoyable narratives. The vast experience he gained by traveling to over seventy countries is visible here. Especially for a man, whose parents were told that he would probably not live past childhood, this is not an easy thing. I am sure this book will inspire many for days to come.