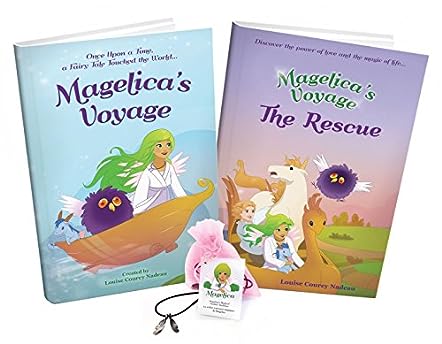 Louise Courey Nadeau, born and raised in Montreal, Canada, wife, mother to two girls and two boys, and grandmother, is the creator and author of Magelica’s Voyage, Magelica’s Voyage: The Rescue and Magelica’s Voyage to the Land of the Fairies; an adventure/fantasy trilogy about a young girl on Earth who suddenly grows wings at the age of 12 and sets out on a voyage to discover who she is and where she comes from. Empowered by her Chosen Mother to follow her heart, Magelica and her fun and wacky friends learn that following your dreams is no easy task! Called upon to connect peoples and worlds, and save the universe, Magelica discovers that the greatest enemy is fear, but realizes that it is no match for courage, believing in herself, and love, the most powerful magic of all.
"Through life's trials and tribulations, I always believed I could. With the Magelica book series, my own beliefs, courage, and determination have been tested over and over. Believing I can, has kept me going! My dream is for young girls to be empowered to grow up strong, positive and powerful, and for young boys to have the self-confidence to support girls in their goals, thereby creating a new gender balance for a new generation.

Just how far can love and laughter go? In Magelica’s Voyage: The Rescue by Louise Courey Nadeau, you’ll find out. When Magelica fell asleep after her kisses and the story that Gri read to her, she had a dream. The dream was about Prince William and Goldy, his goldaron, who were lost at sea, but were able to find a dark island covered in fog. In spite of the dreary conditions, Will encouraged Goldy to stay positive and he even told a joke. Magelica awakened from her dream and knew that she had to get to Queen Raya and the Isle of Dreams that rests upon Turtle’s back. She hopped into the bathtub with her friend Tris and tried with all of her might to believe and make the magic happen so that they could travel to the island. After several tries, she and Tris were finally able to make it to the Isle of Dreams where Odin, Queen Raya and Wally Wizard were waiting anxiously for Prince William to return from sea. When Magelica told Queen Raya her dream, the Queen knew exactly what to do and a rescue was put together with everyone thinking positively about its outcome.

Magelica’s Voyage: The Rescue is a beautifully illustrated and beautifully written children’s story with an important message about being happy and staying positive, even in very difficult circumstances. Louise Courey Nadeau presents this gentle lesson in a light-hearted and brilliantly illustrated manner that draws in readers young and old. The moral lesson is woven throughout and the colors, names and representations correlate very well with the underlying message. Fun and educational, with wonderful color and sharply done illustrations, Magelica’s Voyage: The Rescue is an excellent addition to the library of your young children.