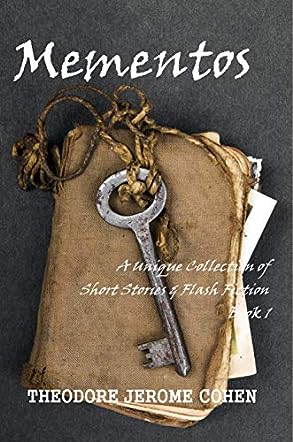 Theodore Jerome (Ted) Cohen is an award-winning author who has published more than ten novels--all but one of them mystery/thrillers--two books of short stories, and eight flash-fiction anthologies. He also writes illustrated storybooks for children (K-3) in the series Stories for the Early Years as well as Young Adult (YA) novels under the pen name "Alyssa Devine." During the course of his 45-year career he worked as an engineer, scientist, CBS Radio Station News Service (RSNS) commentator, private investigator, and Antarctic explorer. What he's been able to do with his background is mix fiction with reality in ways that even his family and friends have been unable to unravel!

Many of us enjoy a set of stories that can be enjoyed as brief, standalone visits to other places and times. Author Theodore Jerome Cohen has written such a set of tales in Mementos: A Unique Collection of Short Stories & Flash Fiction, and with almost forty stories to choose from, there is at least one story for just about any reader. They certainly do vary in theme and location, both in time and space. One “unique” feature of this collection of stories is that each is accompanied by a photo that was used as the prompt for the composition of the story. In Ashley’s Revenge, readers witness a series of “romantic” encounters but its ending will bring a chuckle or a gasp. Cynthia introduces a tryst of chance with tragic consequences; Road to Autumn is a sound bite of a story with a famous crooner talking about “serendipity” and songs; Farewell to a Friend is a poignant commentary on a friendship, mostly by correspondence, and how time can still a favorite voice.

Theodore Jerome Cohen is a fine writer. It is difficult to give Mementos complete justice here. The stories are imaginative and complex while still being very readable, even when rendered in the nonstandard dialects of some of the characters. This collection of stories will certainly be one that readers can browse through by title when wanting something to read without having to invest attention and patience in a series of books, particularly if one has just enough time to read a short story or piece of flash fiction. There is an art to creating such quick stories, and this author has mastered it and, indeed, has a talent for it. If readers enjoy this collection, there is more to look forward to because this particular volume is the first of several. Also included in this book is a list of other published works by this author, so if readers want more, they are definitely available.

Mementos by Theodore Jerome Cohen is a collection of short and flash fiction stories written about varying topics and prompted by pictures. Each picture inspires the story that follows, serving the writer’s creativity and the reader’s imagination. Highlighting a few of the stories by Cohen, Mementos shares the story of a friendship taking a strange new murderous turn, while another tells about the life of a gentleman trying to make a living before, during and after WWII, and another describes a group of friends reminiscing inside a secret cave. There are many more stories; some are sinister and mysterious, some are enlightening while others are just downright entertaining. There is definitely a story for everyone in this unique collection.

I absolutely loved Mementos by Theodore Jerome Cohen. The brilliance and beauty of flash fiction and short stories inspired by image prompt is evident on every single page. Each story has a very different and unique plot with new and different characters as Cohen flawlessly spins every tale, taking the reader on a new adventure. I recommend Momentos to anyone who loves short stories and flash fiction tales that are interesting and in-depth yet only take a few moments to read. This collection could easily become a favorite among fiction readers because of the sheer versatility of topics Cohen writes about. I am sure Momentos will find its way into personal and public libraries among other similar collections that quickly become fan favorites. I cannot wait to see what other tales Cohen has tucked into his other volumes.