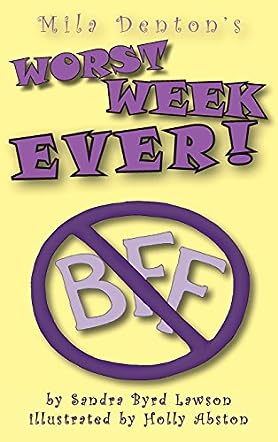 Sandra Byrd Lawson grew up in rural Kentucky and just like Mila Denton, she attended Garrett Elementary School. As a little girl, she enjoyed reading all types of books and exploring the hills and woods surrounding her home. Sandra now lives in Oklahoma with her husband, Tony, 2 dogs, and 2 cats. She was a dental hygienist for 25 years before retiring and writing full time.

Mila Denton's Worst Week Ever! is a storybook for children, grades K-3, written by Sandra Byrd Lawson and illustrated by Holly Abston. Mila's week started in a pretty cool way: Mrs. Bailey, the school secretary announced that lunch would be chili with cheese and crackers and oatmeal candy. This was Mila's favorite lunch ever. Her best friend, Rosie, had shown her how to crumble the oatmeal candy into her chili, which, oddly enough, made it even better. Lunchtime turned out to be pretty awful, however, when Rosie demanded that Mila give her oatmeal candy to her. She threatened not to be Mila's friend anymore if she didn't do it. Mila had no problem deciding; she wanted that candy for herself and could always find another best friend. After that, Mila had no best friend, and the week just kept on getting worse. On Tuesday, she got in trouble with Miss Allen for talking to Jeannette, and on Wednesday, she lost her swinging challenge with Johnny Marcum. And she still hadn't gotten Rosie to make up with her.

Sandra Byrd Lawson's humorous book for children, grades K-3, Mila Denton's Worst Week Ever!, is filled with mishaps and uproarious accidents as Mila tries to negotiate school and winning her BFF back. Even if it's been many years since you were six years old and in the first grade, this whimsical and often downright funny story will have you remembering that first year of real school (kindergarten just didn't count). Mila is a great role model for young kids, especially girls. She doesn't fall for bullying, even if it gets her into hot water with her bestie, and she knows girls can do athletic things just as well as boys. Her story is grand fun to boot. Holly Abston's illustrations are marvelous! They bring Mila and all the craziness of that one awful week to life. This is one book kids will be reading again and again -- it's got all the gross and funny elements that get giggles and snickers, including vomit on the school bus and an unfortunate accident with a panful of gravy. Mila Denton's Worst Week Ever! is most highly recommended.

This is a wonderful book, I look forward to more stories about Mila!