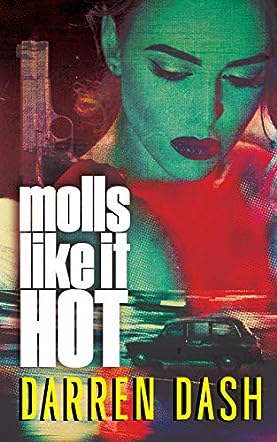 In Darren Dash’s Molls Like It Hot, former British soldier Eyrie Brown is now a London cabbie, living a very ordinary life, eking out an existence driving one of London’s 21,000 iconic black cabs. He has a small, but close circle of friends; there is nothing extraordinary about his life. Until one, slow, wet, miserable night when fares are scarce and he stumbles into a gun-fight involving some East End gangsters. Bored, and desperate for a fare, he takes in a customer, Lewis Brue, who had been involved in the melee and drives him to safety. As a quid pro quo for getting him away from the scene, Brue makes him an offer that Eyrie at first considers too good to be true. All he has to do is babysit a beautiful young lady, Toni Curtis, for one weekend and return her on Sunday night. For that, he will pay him twenty-five thousand pounds, to Eyrie, a fortune that could set him up for a project he would like to undertake. He agrees. But looking after this feisty femme fatale proves a little more difficult than Eyrie could have imagined. By the end of Sunday night, his life will have changed forever.

Molls Like It Hot is written in the first person and there is a nostalgic air about it, reminiscent of Mickey Spillane books from another age. But there is nothing negative to be assumed from that. The scenes are highly visual, the dialogue crisp and realistic and Darren Dash’s characterization is so good you feel you personally know the people involved. The opening scene is like the first ten minutes of a thrilling action movie and as the story gets under way you just have to know where it is heading. The author’s choice of names for his characters is imaginative, making it impossible for you to confuse one for another. As the story nears its dramatic conclusion, it is anyone’s guess what is going to happen next. Molls Like It Hot really is a page-turner. At 194 pages it is not a lengthy novel but that is a plus. If you read it in bed, you’ll want to stay up all night until you finish. Just be careful if you have a bad heart.

Eyrie Brown is a cabbie (a cab driver) in London, a former soldier trying to forget the past and failing miserably. He lives an ordinary life until he meets Lewis Brue, a local killer, in a dark alley while it is pouring. After that meeting, his life turns into a race, fast forward. The game-changer is a girl called Toni Curtis, like the actor, but with an 'i', not with a 'y.' She loves Tony Curtis’s movies, she is young, and she is hot. Eyrie must protect her throughout the weekend. But what could possibly happen in less than three days? However, after reading a few pages, you’ll ask yourself ‘what is not going to happen?’ You’ll have to read the book to the end to find out.

Molls Like It Hot by Darren Dash is an adventure about the London crime scene, where no one is as they seem, and nothing happens by chance. Friendship, love, vengeance, cruelty, and kindness permeate the whole novel until the final twist. It is a story in the first person, so we read it through Eyrie’s eyes. First-person is not my favorite narrative voice, but I barely noticed. That means the author was good enough to make me forget about it. Good and bad characters’ stories entwine between themselves in a fast read—I finished the book in two days. If you want to lose yourself inside the criminal world and a London atmosphere, this book is for you.

Molls Like It Hot by Darren Dash is an action-packed adventure that runs you through the streets of London, England. This crime thriller features Eyrie Brown, just a cabbie who forms a bond with a notorious gangster, Lewis Brue. Commissioned for one weekend to protect a girl, Brown never suspected the trouble he would find himself in. Not only is Toni Curtis an opinionated girl, but Brown believes her to be Brue’s girlfriend, a moll. Knowing her life is in danger if her whereabouts are known makes Brown the perfect bodyguard since they would not know she is at his hang-out. Toni is an adrenaline junkie who loves the thrill of fights, murders, and danger. She never backs down and must be dragged from each fight they encounter. Brown is faithful to fulfill his commitment above what everyone expected, even when he faces overwhelming odds.

We see the thrill of mafia life in Molls Like It Hot as Darren Dash sets the stakes high that Eyrie Brown may not make it through the weekend alive. I love the chemistry between Brown and Curtis as their relationship is on the edge of combustion. You will enjoy the pace as Eyrie Brown takes full responsibility for Toni and races to keep her undercover. The writing is eventful with fascinating characters filling the roles of gangsters. Truly a story that will set you on edge as the danger increases. This book is geared for adult readers as sensitive subjects are mentioned. Recommended for an engaging plot, intense characters, and a satisfying ending, crime readers will eat this up.