No One Ran to the Altar 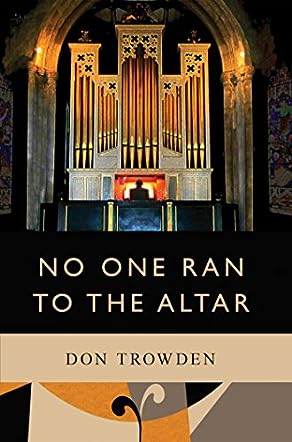 I so enjoyed Don Trowden’s Normal Family, the first book in this trilogy, that I didn’t think twice before grabbing No One Ran to the Altar. The 10-year-old narrator of that first book, Henry, had me laughing and crying throughout the entire story. I was keen to learn what had been the long term effects of this rather unusual family on Henry and his two siblings. Well, I can tell you from the word go, that despite Henry’s well-developed ability to laugh at life and its foibles, the adult Henry no longer laughs as easily, and neither does the reader. Of the three Pendergast siblings, Henry has probably turned out the best. Henry has married a good woman and had two lovely children. But now, as his unlikeable, alcoholic and slowly dying blind father, Ned, becomes Henry’s burden, truths emerge that threaten to shatter the normal family and life that Henry has struggled to build for himself. Both father and son are trying to repair the damage of the past, but their talks increasingly frustrate Henry, leaving him with more questions, and when the answers come, they are devastating.

At the end of the book, Don Trowden confesses that his author name is a play on the word, “downtrodden”. How appropriate! Henry, and it seems, most members of his family, are mentally downtrodden as the failings of each generation are carried into the next. The same mistakes are repeated and when you think about it, chances are that’s true of your family and mine. Some, like Henry, turn to therapy to get above the weaknesses. Others, like Albert, give up trying. It’s recognizing our resemblance to Henry and his family that makes No One Ran to the Altar another undeniably good read for those who aren’t afraid to face reality. We all have our own Neds, Alberts, Eves, Lucys. Don’t be surprised if you find yourself and your family in this book. And just as Trowden did in the previous book, he surprised me with an ending I never saw coming. With his deceptively laid-back, reflective and conversational style, Don Trowden addresses the deep issues that make or break relationships. His writing offers readers insights and therapy for which psychiatrists charge big dollars. Your time and money will be well spent on this book. Read it!

A perfect quotation for this gripping fictional work introduces the book - “Human life is a tale told in tears with a smile.” – Goethe. Henry Pendergast untangles his dysfunctional family’s past after the death of his brother Albert. Henry frequently travels from his island home in Maine to Narragansett, Rhode Island, to oversee the care of his ninety-one-year-old father Ned. Although Henry hates the filthy conditions of his father’s home, he is still trying to understand his unusual upbringing and the complexities of his father’s life. Henry has the support of Laura, his wife of 35 years, and they have two well-adjusted adult children. After many unfulfilling jobs, he is now pursuing his life’s dream, writing novels. Author Don Trowden’s book, No One Ran to the Altar: Volume Two, Normal Family Trilogy, is a gripping read.

The Pendergast family tale is told through Henry’s experiences from various time periods. Some scenes are from his childhood, college years, young adult and the present time. The author has skillfully developed each character, highlighting various features throughout the decades. As Henry tries to unravel some unknown events, the author has dropped a few clues along the way. The reader is engaged from the first page to the last and certainly will want to read the third book in the series. No One Ran to the Altar is full of heartrending moments. Yet, there are also many instances of hope and strength, exemplified by Henry’s commitment to his elderly, sick father. An intriguing story!

No One Ran to the Altar is a work of dramatic personal fiction penned by author Don Trowden, and forms the second novel in the Normal Family Trilogy. Following the formative adventures of Henry Pendergast in book one, in which he introduced us to his incredible family, the story now reopens with a family tragedy that brings everyone together. A series of tales, told in the form of flashbacks, recount the events which lead our favourite family members to their current situations, and Asperger’s sufferer Albert comes to the fore as a new central focus for the novel.

Having only recently delved into the world of the Pendergasts in Normal Family, the first book, I was delighted to see some more episodes from the mind of author Don Trowden. Henry is still very much a part of the narrative, but the switch in perspective opens up new emotive wonders and marvellous opportunities to hold a mirror up to us all, and the nature of family life. What particularly struck me was the sensitive portrayal of Albert’s separation and rescue by his siblings, as those who were young in the previous book have grown to learn important lessons about life, reality, and the lies we tell ourselves. Trowden produces intelligent writing at its best, but leaves plenty of room for pathos, humour, true life drama and even a shocking twist at the very end. Overall, No One Ran to the Altar is an excellent continuation of a compelling and dramatic series. Not to be missed.

Don Trowden’s book two of his Normal Family Trilogy: No One Ran to the Altar continues the narrative of the anything-but-normal Pendergast family. It starts with the story of a family tragedy that befell the once famed and fortunate Pendergast family. The book then goes on to show the effects such obstacles had on Henry and his siblings, Ned (a father once looked up to), and the servants. There seems to be an endless set of trials for the family, mostly focusing on Albert, brilliant but emotionally stunted, and Ned, the delusional father, determined to live his life in a drunken stupor.

No One Ran to the Altar, to me, is even more poignant and complicated than the first book of the trilogy. The situations, troubles, and obstacles written by Trowden are solid, realistic, and unexpected but enjoyable nonetheless. It is filled with pain and drama that seems to constantly surround the Pendergast family, delicately balanced with humor. It takes great talent not to tip the scales between such two different genres in this book. This plot uses a focal cast of characters that grow throughout the entire story. I was easily able to put myself in the shoes of the characters and was able to follow their reactions and thoughts with interest. I think that the second book would appeal to fans of Trowden’s first book in his Normal Family Trilogy. The intrigue builds up steadily before offering unforeseen revelations that truly left me wanting more.

No One Ran to the Altar by Don Trowden has a lot of depth. The Pendergast family can be made a benchmark of a dysfunctional family. The negative impact of parents' ignorance is evident in the lives of Henry and Albert. Albert, who is an intelligent soul with emotional immaturity, feels restricted and intellectually uninspired. He wishes to create and do something original but receives no moral support from his mother, Eve, and no financial support from his father, Ned. Eve is more than happy to push Albert towards completing his Ph.D. in Math but fails to understand and encourage his inclination towards music. Henry, on the other hand, is always the peacemaker in the family. He hates that his mother smothered Albert too much, and he despises that his father never lent a helping hand to Albert, Lucy, and Henry. Henry has so much emotional baggage, yet he finds himself incapable of hating his father. Even though Henry loves his wife, he cannot seem to get over his first love, Chloé, who disappeared from his life with no explanation.

Although No One Ran to the Altar is a part of Don Trowden's Normal Family Trilogy, the family in this series is nowhere close to being a normal family. I have not read the first book of this series, yet I did not find myself confused or lost while reading this second book of Normal Family Trilogy. On the contrary, I felt as if I have known this dysfunctional family from somewhere -- thanks to the clear and relatable writing of the author. I enjoyed all the ups and downs of the Pendergast family. The characters are complex, just like real people. It was impossible to simply love or hate any character. Each of them has a story that needs to be read before forming an opinion about them. If you are someone who loves reading about family drama with complex characters, then this book is definitely for you.