In My Next Life I'll Get It Right 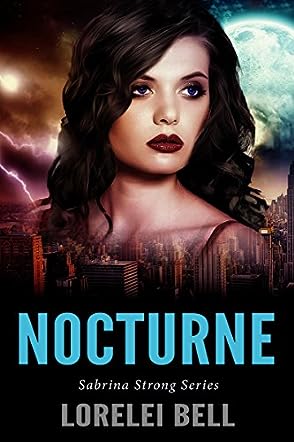 Nocturne by Lorelei Bell is the third book in the Sabrina Strong series. After running out on her wedding with Vasyl, Sabrina ends up in Beyond the Black Veil, a world where vampires rule and humans barely make up ten percent of the population. A world ruled by Drakulya the Impaler, who started the legend of Dracula. Sabrina thought her biggest problem was how she'll face Vasyl again, then her brother shows up at her door and delivers the devastating news that her cousin Lindee has disappeared. Returning to the other world, Sabrina meets the mysterious Jett, a vampire prince that feeds on energy, and who quickly captivates her with his charm. This world is plagued by Dreadfuls, ghost-like beings that prey on the town, and only Sabrina seems to be able to stop them.

As Sabrina uncovers a sinister conspiracy, she makes a risky deal with Drakulya. If she's going to survive, she has to learn to trust Jett and rely on the Dagger of Delphi. Sabrina encounters new dynamics. She's in a certain position of power as even Drakulya sees her as a warrior. Her journey has brought her a long way since she first went to work for Tremayne. She's honing her abilities and embracing her position as the sibyl with a more brazen attitude. The more she accepts her power, the stronger she becomes as a character. It's fun to see Sabrina out of her element, and to see her taking charge of her new power to travel ley lines while also standing up more against these powerful and scary vampires.

Nocturne reads almost like a whole new story, just with the same snarky and dangerous tone. The characters readers met previously in the series are sidelined this time around as Sabrina meets new characters. The complicated love triangle with Tremayne and Vasyl, and the recent re-establishing of vampires hunting humans, takes a back seat to this new story line. However, everything connects. The primary setting is this new world, Beyond the Black Veil, which has a 1800s feel to it with small progressions made in technology, and this adds to the fascinating vampire lore as these vampires don't experience a transitional change but often change gradually in a natural progression, much like puberty. Nocturne explores a new side to Sabrina in an almost standalone adventure filled with romance and surprises, new characters, a new world, and a further exploration of vampire lore.