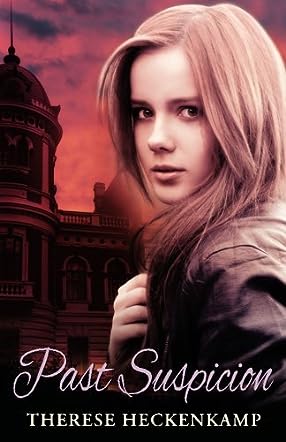 Therese Heckenkamp was born in Australia in 1981, but moved to the USA in 1983. Always a fan of books, she started writing stories before she could spell. A homeschooled student, she won numerous writing awards while growing up.

At age 18, Therese completed the first draft of Past Suspicion, her first published novel, a Christian suspense story for readers 13 and up.

Therese's second novel, Frozen Footprints, is a Christian suspense thriller for readers 16 and up.

Both Past Suspicion and Frozen Footprints have reached #1 Bestseller in Amazon Kindle Religious and Liturgical Drama. Both novels have also been awarded the Catholic Writers Guild Seal of Approval.

A busy wife and mother of four, Therese fits in writing time whenever she can manage (and sometimes when she can't). A member of American Christian Fiction Writers, she looks forward to writing many more novels in the future. Her newest release, After the Thaw (the long-awaited sequel to Frozen Footprints), is a 2016 Readers' Favorite Bronze Medal Winner in Christian Fiction. Therese always welcomes reader feedback and comments. Visit her at ThereseHeckenkamp.com.

Past Suspicion by Therese Heckenkamp is an intriguing mystery story that tells of the revelations a young woman, Robin Finley, uncovers regarding her late mother’s past. At the age of 17, Robin is orphaned and sent to live with an uncle she never knew existed in her mother’s hometown, where secrets from the past become tied to her future. In an effort to understand what happened to her mother, Robin uncovers a quest for hidden treasure that led to tremendous heartache and tragedy, and threatens to ruin Robin’s life as well. With an intriguing cast of characters, led by two young men to whom Robin is attracted, the mystery unravels, putting Robin into the same danger that overcame her mother 18 years before. This leaves Robin realizing that she must first and foremost put her faith in God.

Therese Heckenkamp explores the insights, emotions, and shortcomings of a teenage girl trying to live her own life after her mother's untimely death. Unsure of whom to trust and not wanting to be thousands of miles away from home with strangers she knows nothing about, Robin tries to be independent and forgets her greatest strength –- her faith in God and prayer. While solving the mystery presented by information about her mother’s youth, Robin is confronted with countless emotional pulls that leave her confused and unsure of how to continue. While solving the puzzle, Robin’s own life becomes endangered and she learns that she has not given enough credit to the right people.

This is a great book about growing up and understanding that doing what you want is not always the best plan and that all choices require honest consideration, planning, and faith.

Fast paced Christian suspense story. Fantastic plot, wonderful characters, heart-stopping suspense. What else can I say? There are so few good clean novels for teens that will hold their interest. This is definitely one of them. Ms. Heckenkamp is one heck of a author. I hope she writes a ton of books!