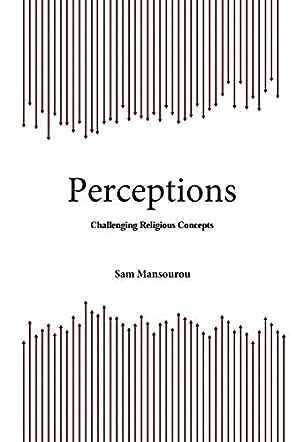 Sam Mansourou doesn’t waste any time in his pursuit to shake the reader’s belief system, opening a window to startling concepts and revelations. The author dismisses the notion that ‘God will set the chaotic world events correct by Divine judgment.’ Despite any logical merit, the faithful still cling to this absurdity. Defenders of divine intervention argue that humans are not capable of such comprehension, which doesn’t answer anything. The claim made by the three main world religions that they are guardians of man’s morality reflects closed-minded views of those who wrote the texts, mirroring a social culture of those times. How can Christianity defend pedophile priests as pillars of moral behavior, refusing to denounce them? Reflecting Spinoza’s view that, ‘Knowledge of what the world is actually like better equips one to make moral judgments than does faith and dogma.’ The Bible contains examples of good deeds, but no insight into the nature of inner suffering or how to cope with it. Instead, it promises, through God, wealth to those who desire, vengeance for the suffering and an end to unhappiness if the practitioner follows religious law.

The reason for the change to intelligent design by those seeking to detach from the less attractive creationism is obvious. Since the scientific revolution there has been little said by the religious community that coincides with any relevant spiritual discovery or notion. The author maintains, ‘Since the alleged life and death of Jesus little has changed regarding materialistic points of view, especially among the religious masses. Whether it is the Christian, Jew, or Muslim, the vanity, along with the desire for social status, wealth and power, luxury and pleasure is as pervasive as ever, regardless of the “influence” of the Holy Spirit and other religious claims throughout the centuries.’ Albert Einstein once wrote, ‘The religion of the future will be a cosmic religion. A religion which is based on experience, which refuses the dogmatic. If there's any religion that would cope with the scientific needs, it will be Buddhism.’

Perceptions: Challenging Religious Concepts challenges the notion that religion is equivalent to spirituality, its value in modern society, torn apart over millennia with wars inspired by various religions in pursuit and imposition of the ‘true’ faith, relegating ideals such as morality, ethics and philosophy to the dustbin of triviality. Sam Mansourou’s book will raise more than one eyebrow and startle believers, whether they practice one of the three mainstream faiths or an Eastern philosophy, which the author claims has far more relevance in advancing man’s spirituality in today’s materialistic world where the only belief is in the dollar. The Bible has failed Christians, advancing an angry, vengeful god in the Old Testament, and a Jesus in the New Testament who claims he isn’t a god, yet was made one to quell unrest in the Roman Empire. Whatever your belief, Sam Mansourou will leave you thoughtful, wondering whether embracing genuine spirituality advocated by Eastern philosophy would be far more soul satisfying and useful than adopting blind faith in a hollow promise of a blissful afterlife. Perceptions is a far-reaching thesis with genuine relevance in today’s troubled society, but you must be open-minded to realize its value. This is a worthy work of scholarship.