The Book of Sorrel 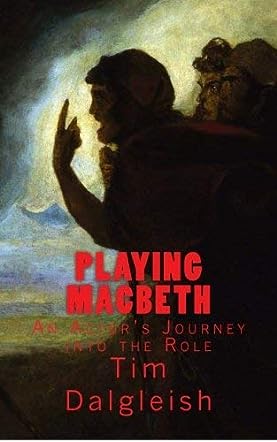 Tim Dalgleish, an erudite scholar who has been an accomplished actor, and a teacher of English, philosophy, history and acting, has surpassed himself in this fascinating autobiographical effort to pass on the very essence of the art of theatrical performance to the next generation of actors. In the narrative of Playing Macbeth - An Actor’s Journey into the Role, the author delves into the lives of many legendary actors who continually redefined the art of acting. He explains great actors' traits from his personal exposure to directors, support staff and leading actors like Peter O’Toole, Orson Welles, Laurence Olivier and many others who made a unique flamboyant entry into the world of acting. A line I particularly found memorable is, “Great actors, like great characters, often make their way by being the person other people want them to be.”

The cover is good, reflecting the aura of foreboding running through the play, Macbeth. Formatting is good, the content precise and focused on the development of an actor’s role. Tim Dalgleish’s own as well as shared experiences of virtually the entire ensemble of a show are extraordinarily illustrative of the depth of understanding and awareness that a successful actor has to imbue into his own psyche. Fluently written with well organised chapters flowing seamlessly into the next, each builds on a different trait or nuance of acting. Various topics are touched upon, ranging from the pecuniary benefits to actors, to style, emphasis, accents, type and speed of delivery of passages by actors and many, many more including the emotional, physical and intellectual challenges involved.

The book elaborates on many essential skills, for example the development of internal self-criticism. The reader embarks on a thrilling journey, exploring many facets and nuances that a student must absorb into his personality before fitting a particular role as an actor. The author presents how the actor-screenplay-director combine, often taking many liberties with the authenticity of the original text in order to design delivery to delight the audience. This little book is actually too big and monumental for me to really give it the credit due within the constraints of this short review, but I certainly think that it is essential reading for any actor.