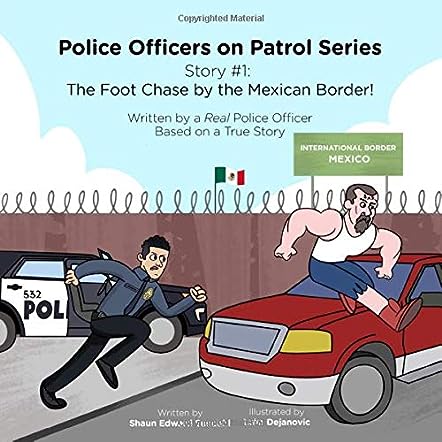 Shaun Sundahl is a sworn police officer who works at the US/Mexico Border. Through his law enforcement background and since he is the father of four children between the ages of 0-15, he is able to connect to his readers.

Police Officers on Patrol Series for ages 4 – 8 years is a realistic depiction of the lives of police officers. Officer Adrian Cordova works in a small town near the Mexican/US border; his job is to catch the bad guys. These are defined as guys who do not follow the rules. Descriptions of the equipment an officer needs – handcuffs, taser, gun, baton, radio, pepper spray, body armor, flashlight – are given. Additionally, his badge and car are also shown. When Officer Cordova encounters Bobby the Bad Guy, he successfully arrests him and puts him in jail. Author and police officer, Shaun Edward Sundahl, has written an educational children’s book in Police Officers on Patrol Series (The Foot Chase by the Mexican Border!). This book is written in a participatory style, asking the child reader questions throughout the story.

Other interesting features include information about Hispanic officers and working near the Mexican/US border. The plot of this story is about a bad guy who is destroying property and how the officer chases him, finally catching and arresting him. The information is factual and may alleviate any anxiety a child may have about police officers. The illustrations by Luka Dejanovic are appealing and stimulating to a child’s imagination. The book will easily engage a child’s attention. Most children will have many questions about the real-life scenario. Entertaining and informative, Police Officers on Patrol Series (The Foot Chase by the Mexican Border!), written by Shaun Edward Sundahl, will teach many important lessons to inquisitive children.