A Fresh Way to Read the Best-Selling Book of All Time
by B. Tyler Ellis
Christian - Devotion/Study
960 Pages
Reviewed on 05/24/2013 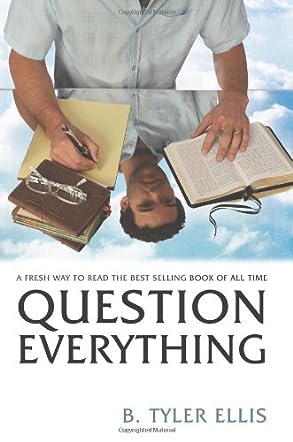 Tyler Ellis has been in Christian ministry to the college-age generation since 2001.

After serving two years as an apprentice missionary in Australia and Samoa, he graduated from the Adventures In Missions (AIM) program. He then joined the AIM staff for three years as he obtained his Bachelor of Biblical Studies at Sunset International Bible Institute.

He now resides with his wife and daughter in Newark, DE, where he serves as a College Minister at the University of Delaware, and board member of Campus for Christ.

Tyler enjoys traveling, speaking, and blogging. His articles have been featured on many popular blogs, including that of Rick Warren and Michael Hyatt. He has spoken at a number of events, including conferences held at Pepperdine University and Texas Tech University.

His first book, “Question Everything: A fresh way to read the best-selling book of all time,” is endorsed by some thirty well respected men and women, including Bob Russell, Phyllis Tickle, Ray Comfort, Jim Burns, Leonard Sweet and David Bercot. “Question Everything” was a 2013 Readers' Favorite Gold Medal Winner.

“Question Everything: A Fresh Way to Read the Best-Selling Book of All Time” was written by B. Tyler Ellis. The author has created an interesting way to study the Bible; in this book the reader will find a question pertaining to every verse in the New Testament. Most of the questions appear very simple; however, they are created to get the reader thinking. Too often we read the scriptures and do not comprehend or think about what we have just read; by using this method readers will first read the scripture and then the question. At the end of each chapter the author has a few questions for the reader to answer: “What does the chapter reveal about God? Myself? Others? What difference does it make?”

I enjoy Bible study and was intrigued with the author's approach. I soon realized that I could not answer some of the questions as easily as I expected. This is not a book for an in-depth study but is excellent for a beginner. This would be a great study for a middle school or high school group. The questions could easily stimulate a deeper discussion. The author does not provide answers to the questions; the format leads the reader to find the answers for themselves. There is a big difference between what the scriptures say and what they mean. Too often readers turn to a reference book to define the meaning of the scripture, but with this method of study the reader develops their own understanding. This book will make a great addition to your library.