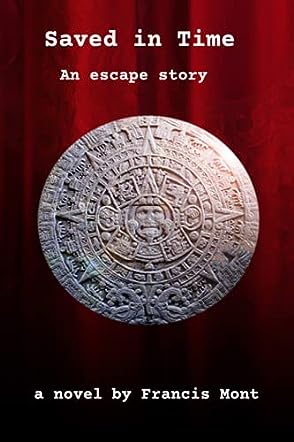 Francis Mont has been living in Canada for the past 40 years, after he emigrated from his native Hungary where he studied science and received a degree in Theoretical Physics. Over the years he did research, application and teaching in Mathematics, Physics and Computer Science. He is interested in profound questions, both in science and in social philosophy. He is a 'big picture' person, focusing on fundamental principles and the defining essence of the topic at hand. He also pursues independence and self-reliance to the best of his abilities, as his solar power system and year-around greenhouse demonstrate. He writes poetry, plays classical violin, dabbles at wood carving and has not yet stopped building the house where he and his wife and (currently) five cats live.

Saved in Time: An Escape Story is a sci-fi political thriller written by Francis Mont. At a random garage sale, Zack Dougall gets his hands on a device that he names the Time Scope. It allows him to observe events from the past by entering the exact coordinates of time and space. After unwittingly letting his discovery be known to two other men, Senator Gordon Hopkins and mob boss Joe Petuccini, the trio finds themselves working together to disqualify a Nazi sympathizer named Norman Brady from competing in the presidential elections. But it only encourages Brady to take extreme measures as he forms his own private militia to gain power. Senator Hopkins and his friends must learn from the past and accept help from an ancient civilization to stop a civil war from brewing.

Saved in Time: An Escape Story is an entertaining science fiction tale that encapsulates the concept of history repeating itself. Author Francis Mont's fast-paced narrative deftly showcases humans' tendency to repeat past mistakes in their quest for power. The cast is quite large, and multiple POVs are used to portray the varying factions involved in the narrative. The inclusion of extremely radical political factions in the plot has some accurate real-world parallels. I found Zack, Joe, Ivo, and Jenna to be my favorite characters from the bunch. I particularly enjoyed the Atlantis chapters and found the advanced civilization fascinating to read. If you're looking for an entertaining science fiction adventure sprinkled with some meta-commentary, Saved in Time: An Escape Story is the book for you.

Saved in Time: An Escape Story by Francis Mont is a science fiction story with strong political underpinnings, and one can even think of it as a creative form of rethinking contemporary history. Zack lives off his inheritance but then he discovers a machine, a powerful device called the “Time Scope” which allows anyone to view historical events as they happened in the past. Using the buttons and the dials, the device allows Zack to tune into historical events. Senator Hopkins, an honest politician who is absorbed with the idea of saving the nation from a presidential candidate with authoritarian tendencies, takes a fancy to the device. His plan is to use it to stop a power monger from becoming the next president of the United States. Zack, Hopkins, and Joe Petuccini, a bad thug turned good man, team up to save the country and, probably, the world. The stakes grow bigger as the plot moves forward.

The second part of the book follows a character from another planet on the quest to uncover his origins. Ivo is convinced that their planet has never been the birthplace of his species and every archeological research has failed to indicate otherwise. Then he discovers someone using the scope and contact with Zack begins an adventure that established a strong connection between the Earth and their planet. Can the people of the Earth accept the cure that Ivo proposes, a cure for the worst pain of humanity, the genetic brain disorder?

While some readers might not fully experience a strong emotional connection with Francis Mont’s characters, Saved in Time: An Escape Story presents a concept that is original and will captivate fans of time travel, even if there is no actual time travel in the story. I loved the idea of being able to dial into history and watch events as they happened. The characters are well-drawn and written with compelling backgrounds. The encounter between Zack and the old man from whom he buys the device, something that costs him only fifty bucks, is interesting. The conflict is well-written and the connection between Senator Hopkins and the infamous Mafia boss, Joe Petuccini, is intelligently introduced. Zack’s desire to prove the innocence of the senator regarding media accusations of a link between him and the crime boss pulls Zack into their worlds. The narrative is filled with interesting commentaries and I enjoyed the streams of consciousness, such as when the protagonist thinks about opening an agency to solve cold cases using the device. This is a story with strong plot points, a compelling political conflict, and characters that are intriguing.