Mindfulness and Infinity of Thoughts Summer of the Shark 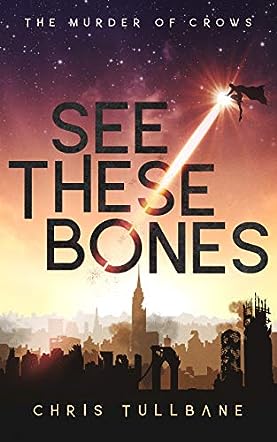 Chris began life as a gleam in someone’s eye, but birth and childhood were quick to follow. He’s been fortunate enough to live in Spain, Germany, and all over the United States of America, and is busy planning a tour of the distilleries of Scotland.

He currently lives in Nevada with his angelic wife and ever-expanding whisky collection and occasionally ventures outside to peer upwards, mutter to himself about ‘day stars’, and then scurry back into the house.

Chris is the author of two series; The Murder of Crows and The Travails of John Smith. He frequently shares new content, including some complete short stories, on his author website at https://christullbane.com.

See These Bones is a fascinating dark work of science fiction and dystopia, and was penned by author Chris Tullbane. The central figure in this would-be heroic tale is Damian Banach, an eighteen-year-old who discovers that he has inherited a deadly and undesirable superpower from his murderous father, David. At the Academy of Superheroes in Los Angeles, David hopes to escape the tragedy of the Crows and their penchant for necromancy, but the accompanying silent ghost of his mother suggests that his haunted days are far from over. But once at the Academy, there are more people to despise him, and far greater challenges waiting than he could ever have imagined.

Recommended for mature young adults and adult readers due to some swearing and violence, this is a realistic and emotive look at the dark side of superpowers, which grabs its readers from page one. Author Chris Tullbane puts heart and soul into Damian, giving us the deadly backstory to the fascinating Crows, and the dark destiny that awaits the hero will have readers empathizing with so much. Alongside this superb character work (which extends into the whole Academy and its inhabitants), there is a great consideration for magical realism, mixing superheroes into Los Angeles with realistic and amusing consequences. The dialogue, too, is suitably snappy but not overdone, keeping this a fun sci-fi conceptual piece, but also a relevant dystopian drama. Overall, See These Bones is a must-read for any dark superhero fiction fan seeking an original new tale.

See These Bones by Chris Tullbane is the story of Damien, a young man who faces a dark future, set to follow in his father's murderous footsteps. The world has radically changed and is full of people with superpowers. Damien is a Necromancer and they always turn bad. His father killed his mother and went to prison for it. Damien knows he will end up the same way himself when he is older as they have a tendency to go mad. When Damien is taken away by Mr. Grey, he is plunged into a new world and faces some tough choices, but he does not have a lot of options.

I really liked Damien, he is an interesting character and the story moved along well. The information about this new world was woven into the plot well and made for interesting backstory. He has the right amount of snark and sharp wit to entertain. It reminded me a little of The Boys TV show. If people really did have superpowers of a sort, then I imagine most of them would misuse these and cause chaos. Chris Tullbane has created an entertaining and well-written book in See These Bones. I like the idea of someone fighting against their fate, even if the outcome does not look good. I think this would appeal to action, dystopian and superhero fans. There is also the ghostly element which would appeal to supernatural fans too. I would definitely recommend See These Bones. It was a very enjoyable read.

See These Bones by Chris Tullbane reminded me of superhero movies like X-Men and Sky High. A man dreamed of a world where people would possess superpowers, and, when he woke up, his dream had manifested into a reality. In his dream world, people with powers worked for the welfare of humanity, but in the real world, only a handful of these people worked towards saving the weak. This set of people with powers were called Capes. Although having power should have been a good thing, there was one power that nobody wanted. The reason for this was the fact that the owner of this power (known as a crow) had a record of going mad and becoming a mass murderer. So, when Damian realized that he was a crow, he was desperate to find a way out. Even though the Academy of Heroes never enrolled a crow, Damian was allowed to be the first crow to get a chance to be a Cape. This generosity would have felt much better if most of his classmates and almost all the teachers of the academy were not hellbent on getting him expelled.

Chris Tullbane, the author, has a flair for sarcastic humor. Damian's tragic past could have imparted a lot of grief to readers, but his witty narration banished melancholy from the plot. Since Damian's father killed his mother when he was only five years old, Damian spent the majority of his life (until turning 17) in an orphanage. Such a childhood is bound to create trust issues, and Chris Tullbane has very delicately introduced this attribute into Damian's character. At times, this "flaw" of Damian's frustrated me, but at the same time, this characteristic added authenticity to his character. The diverse and powerful personalities of the side characters also successfully left their mark on the story. The training of the first years in the academy was one of the many elements that added to my entertainment. Once I picked up this book, nothing could stop me from putting it down until I reached the end. Packed with superpowers, admirable imagination, unlimited twists, and extremely witty narration, See These Bones by Chris Tullbane is one of the best fiction books that I have come across.