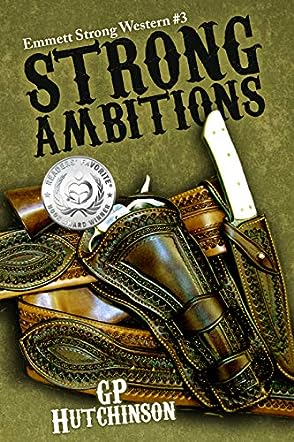 GP Hutchinson fell in love with the Old West decades ago—the gritty reality of the era, the daunting yet breathtaking scope and scale of the land, and the colorful (if somewhat fanciful) tales of heroes and heroines who overcame the odds. Texas was his home for a few years, and subsequent visits to states throughout the West only served to deepen his enthusiasm for the region and his appreciation of its people. In 2015 he published his first Western novel, Strong Convictions, which won him the Western Fictioneers Peacemaker Award for Best First Western of that year, as well as a National Indie Excellence Award. Strong Suspicions, the second volume in the Emmett Strong Western series, garnered a Gold Medal in the 2016 Readers’ Favorite International Book Awards. Regarding Strong Convictions, Classic Western film star Alex Cord wrote, “GP Hutchinson has the gift to tell a compelling tale, enlighten you without preaching and keep you on the edge of your seat. He takes you on unexpected trails populated by flesh and blood characters of depth and substance.” A graduate of Louisiana State University and Dallas Theological Seminary, Hutchinson has lived in Costa Rica and Spain. He currently resides in upstate South Carolina with his wife, Carolyn. Besides writing, he enjoys spending time in the mountains and horseback riding whenever the opportunity arises.

Strong Ambitions: Emmett Strong Westerns, Book 3 is a Western novel written by G.P. Hutchinson. El Paso Marshal Emmett Strong was worried about his best friend, brother-in-law and the town’s deputy marshal, Juanito Galvez, and his wife’s welfare in town. Geneve Lambert Galvez had been a bar girl, and certain men in town persisted in harassing her whenever she went into town. Even being accompanied by Li, Strong’s wife, wasn’t sufficient enough of an inducement to keep them away -- and that was saying something. Li was not only an expert shooter, she had other defensive skills that made her a formidable adversary indeed. When their friend, Jack Van Dorn, mentioned that Benficklin, a small and thriving town, was in the market for a marshal, Strong thought that Benficklin might be the answer to Juanito and Geneve’s problems. It would be a fresh start for them. Then things got really complicated in El Paso, and both the Strongs and the Galvezes decided to leave town and head to Benficklin.

G.P. Hutchinson’s Western novel, Strong Ambitions: Emmett Strong Westerns, Book 3, is a fast-paced and exciting story about law and politics in the old West. I had not read the preceding books in this series, but found I had no problem getting involved in this story. Hutchinson’s characters are authentic and well-defined, and I appreciated his outlook on the politics, set ways and prejudices that afflicted even the early years of the Western expansion of this country. The author also weaves a compelling mystery into his story, and he presents the reader with a number of possible culprits to consider, making this an impressive historical mystery as well as a Western. Strong Ambitions: Emmett Strong Westerns, Book 3 is most highly recommended.