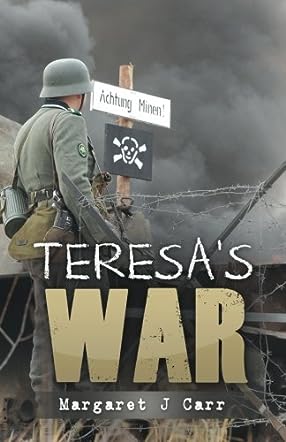 I wrote my first book, an adventure story, at 12 when recovering from a childhood illness. After leaving school I trained in cosmetics and skin care until becoming the chief perfumery and cosmetic buyer for a department store. As a wife and mother I wrote the odd article or short story for magazines but it wasn’t until the 1980’s I returned to writing fulltime and have now completed over twenty fiction novels, ranging from murder mystery series to a teen fantasy trilogy and historical family saga. One of my titles has been on Waterstones best seller list and another was translated for the Indian market.

Ten years ago I was writing scripts for TV soaps and radio, including storylines for the popular soap operas Eastenders and Coronation Street. I have one son and two grandsons and live a quiet, but busy, life in the north west of England.

Teresa’s War by Margaret J. Carr is the story of Josef, his wife Hilde and their two daughters, Teresa aged seven and her younger sister Liesl, who are living in Austria in 1942. Teresa is now a very old woman and is sitting on a park bench remembering her childhood days. It is the beginning of the war and Hitler and the Nazi party are in the process of occupying Austria. Josef is caught up in the times and becomes a fervent follower of Hitler. Hilde is not so sure this is right, but remains quiet and honors her husband’s loyalty to the Nazis. When she comes home one day to find a Hungarian family hiding in her barn, she believes God would want her to help them escape certain death if they are found. She hides them from her husband and children, gives them food and drink, and promises to show them the way through the forest to the Swiss border. She shares this information with Teresa, making her promise to never tell anyone. When Hilde is unable to lead them through the forest, Teresa takes it upon herself to perform this task. As Teresa looks back, she remembers the scary and dangerous undertaking and the months that followed.

Margaret Carr has written a moving story that will touch all of your emotions. I could really feel myself sitting on the bench with Teresa and sharing her pain as she thought back to her childhood and the part she played in helping people escape the German Reich. Teresa’s War touches a piece of World War II that will make you cry and make you cheer and make you proud. I believe this is a book that needs to be read by everyone in order to fully understand the horror of war. I was amazed at the difference one young and very brave girl made by saving people she did not know and would never meet again. Seven-year-old Teresa led them through the forest and found herself facing German soldiers that she had to lie to in order to protect the escaping families as well as her own family from sure death. I really enjoyed reading Teresa’s War and highly recommend it.