The Wages of Sin

The Wages of Sin Stories for My Sons 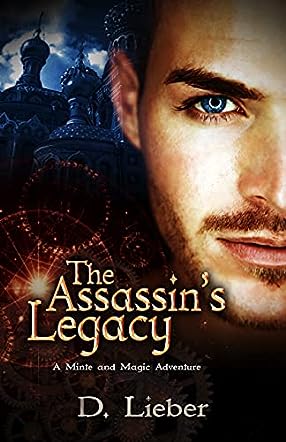 D. Lieber has a wanderlust that would make a butterfly envious. When she isn’t planning her next physical adventure, she’s recklessly jumping from one fictional world to another. Her love of reading led her to earn a Bachelor’s in English from Wright State University.

Beyond her skeptic and slightly pessimistic mind, Lieber wants to believe. She has been many places—from Canada to England, France to Italy, Germany to Russia—believing that a better world comes from putting a face on “other.” She is a romantic idealist at heart, always fighting to keep her feet on the ground and her head in the clouds.

Lieber lives in Wisconsin with her husband (John) and cats (Yin and Nox).

Sasha Volonov left home in a self-imposed exile because he didn’t want to head the ubyzniki. The ubyzniki was a Russian cult-like organization comprising a few prestigious families designated to protect Russia from harm. However, their ideas didn’t please Sasha, who was the best assassin and a member of the highest-ranking family in the group. He felt free until his father died and his sister, Yulya, sent a hitman after him because she wanted to head the cult. Unfortunately, his father also bound him to the ambitious Veronika Ivashkina and sealed it with the glaz smerti curse. He had to marry her and, together, head the ubyzniki. Refusal to adhere meant death. With a hitman and a curse hanging over Sasha’s head, what will he do? Find out in The Assassin’s Legacy by D. Lieber.

The Assassin’s Legacy was a very engaging read. It incorporated adventure, action, magic, and elements of romance to make a gripping novel. The plot was indeed strong, unique, and unpredictable. I held my breath for the most part. Betrayal, the ambitious nature of humans, family politics, and the quest for power were on full display. I loved how Lieber developed the characters in a relatable fashion. Although the characters were refined as the book progressed, they remained consistent. My favorite of them all was Liza. My goodness! Who would have thought that she had all that depth? She fooled me, and I loved it. She would make the perfect poster girl for the phrase, "Still waters run deep." I enjoyed the reportage writing style and the blend of old-world charm with 21st-century glitz. Will there be a return of Nika? Thumbs up for a beautiful book by D. Lieber.