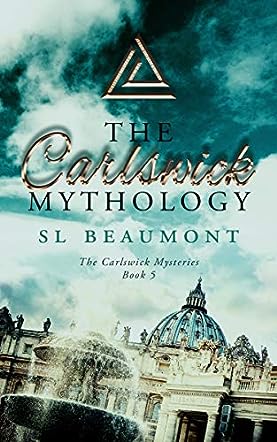 The titles in The Carlswick Mysteries series were awarded honorable mentions at the San Francisco Book Festival and have been finalists in the Wishing Shelf Book Awards. Shadow of Doubt won the Indie Reader 2020 Mystery, Thriller, Suspense award, is long-listed for the 2020 Ngaio Marsh Award for Best Novel and was a semi-finalist for the Publisher’s Weekly Booklife Prize and the Kindle Book Awards.

Prior to becoming an author, SL Beaumont worked in banking in London and New York. Her passion for travel has seen her take many long haul flights from New Zealand. Her love of history helps determine the destination and the places she visits are a constant source of inspiration for her.

The Carlswick Mythology: The Carlswick Mysteries, Book 5 is a sleuth mystery novel written by S.L. Beaumont. While they had had their share of adventures together, Stephanie Cooper and her rock-star boyfriend of eighteen months, James Knox, were finally going away together on vacation. She had just finished her second year at Oxford and had returned to her grandmother’s home in Sussex when James sprung the news of their surprise vacation on her. When they finally arrived at Heathrow, Stephanie was thrilled to discover that James had booked them for four days on the island of Santorini where her friend, Kerry, just happened to be working on an archaeological dig. She and James would be touring the Minoan ruins with Kerry the very next day. As the unexpected usually did happen when Stephanie was involved, their visit to Santorini was no exception. Armed intruders stole irreplaceable objects that were not Minoan in origin, and Kerry’s colleague and romantic interest seemed to be the most likely suspect. But how did they get there?

The Carlswick Mythology is a fast-paced and exciting novel of suspense set in the Greek islands. I loved exploring the island of Santorini with Stephanie and James and touring the Minoan ruins with them was a marvelous bonus. Beaumont’s characters are authentic and credible, and Stephanie’s musings over her future will resonate with many new adults. The underlying mystery will keep armchair sleuths mulling over the red herrings strewn in their path, and the tension between the police procedural and private sleuth aspects of the series continues to enthrall and delight. The author’s story is well-written and fun to read. The Carlswick Mythology: The Carlswick Mysteries, Book 5 is most highly recommended.