Promise is a Promise The Colours I See 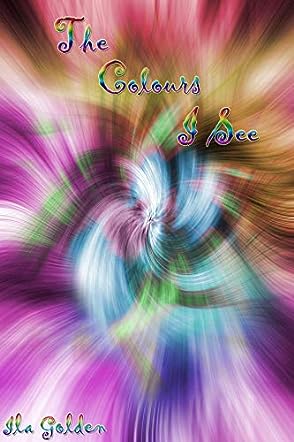 Ila Golden was born in Plymouth, England, the second of three children. When she was six her maternal grandmother had a series of strokes which left her permanently disabled. As a result of this she and her family moved in order for her grandmother to live with them, selling both their home and their grandmother's home in the process. During this transitional period Ila discovered her love of storytelling whilst telling her younger brother stories about two little mice during the long car journeys to school and back.

As she grew this love of storytelling became a constant rock in her life, despite all the turmoil and changes happening around her. And it was during her teens she would begin work on the two stories that would drive her ambition forward and eventually lead her down a path towards Indie-Authordom.

The first of these two stories was Hyena Boy, which would undergo years of on and off attention before finally being published in 2018. The second was a fanfic which gave her insight into why she loved writing - for the enjoyment of the readers, especially those she was able to connect with.

Ila Golden went to university in Winchester, England, where she studied Drama and Creative Writing, leaving with a 2:1 degree.

With a large backlog of unpublished books at her disposal, Ila Golden may not yet be the best selling author she dreams of being, but she's now more than ever determined to reach that goal.

The Colours I See is a work of magical realism, LGBTQ+ and interpersonal drama fiction penned by author Ila Golden. Written as a volume to contribute to the Neva Aton Collection, this work features a standalone tale that connects to many others but can be read in any order in the collection as a whole. This story focuses on central character Zel, who has a great many things which make him different from those around him and give him additional struggles he must deal with. The story is set in the 1970s and '80s but with a few speculative and magical twists, and Zel’s sexuality and romantic interests form a central plot as part of the tale.

As we weave through the family tapestry of Zel’s life with his aspirational parents and the history of his artistic Aunt Zelda, we learn that Zel has an intuitive gift to see auras of color around people. As he hones his skills and uses them to assess the emotions of others, Zel realizes that he can utilize this to help people, and also to his advantage. So when he discovers that he has developed a crush on one of his best friends, the temptation to discover whether his feelings are returned proves too much. What results is a powerful tale about the nature of relationships, awakening and becoming self-aware despite the influences and pressures around you.

Author Ila Golden has created an epic-length story to tell the tale of Zel’s experiences, as well as his connection to the other 3 boys who form the central storyline of The Neva Aton Collection. The narrative takes us through many winding twists, and it is primarily driven by the central character’s experiences through forty-eight chapters of interpersonal connections and the fallout from the use of his powers. One of the things which I really admire about the creation of the work is the seamless inclusion of the magical/paranormal element into the tale, and how despite Zel’s abilities, the drama feels realistic and still grounded by true emotion. Golden utilizes poetic and lyrical imagery around these colors, creating an atmosphere that feels highly artistic and vivid when you experience it alongside her main character.

There is some explicit content within the novel which makes it suitable for adult readers and mature readers on the YA/NA spectrum; for example, themes of abuse and some scenes of violence and use of explicit language. These elements feel justified and realistic to the plot, and serve to intensify the drama and the personal experiences of the cast. The craftsmanship of this realistic portrayal of awakening to one’s sexuality and exploring emotions, future goals and achievements are expertly done, taking us deep into the life of a group of young men who appear fated to have all found one another. Overall, I would certainly recommend The Colours I See as an emotive and thought-provoking reading experience, and certainly one for those who would like to stay with a character for a long time and really get to know them intimately.