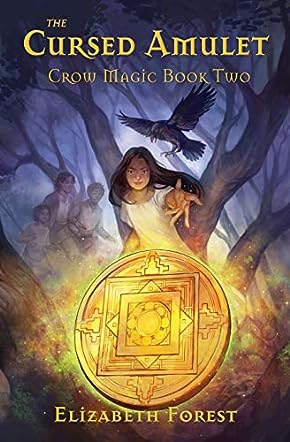 Elizabeth Forest writes historical and speculative fiction for readers of all ages. She’s drawn to other cultures, alternate worlds, and the lives of those outside the mainstream. Join her VIP Readers' group at http://www.elizabethsforest.com/newsletter to hear about new books and special bonus features for members. She can also be found on twitter @elizasforest.

The Cursed Amulet by Elizabeth Forest is the second book in the Crow Magic series. Suli has settled into her role as a wise woman but she couldn’t have predicted that when she helped a young girl, she was about to discover far greater trouble. She soon finds herself with an apprentice and as the two make their journey back to Suli’s home, it’s quickly revealed that Arta has her own special abilities. Arta can communicate with animals, which helps when they stumble upon a pack of dogs chasing after a young boy. Suli learns of a ploy to kill the king and queen when she discovers the terrifying reality of soldiers rounding up witches into camps. She and Arta catch the attention of the corrupt prime minister who is determined to track them down and capture the prince, no matter what it takes.

This plot is beautifully complex as Elizabeth Forest weaves together several threads to form a stunning tale of danger and adventure. The relationship between Suli and Arta is at the heart of the story as the two strong-willed and stubborn girls challenge each other. They both have big hearts and a lot of power. The story has a mystery - a sickness affecting the animals has made them stop eating and has caused the young to die. The witch camps and the animal sickness both tie directly into the prince being chased with these threads forming a larger obstacle they must face in order to save animals, people, and magic. Each threat raises the stakes for the girls and they must work together if they’re going to save everyone. Forest breathes life into this complex world of magic with a layered system of animal nations, wise women, and magic.

This is the second book in the series but the story is easily followed as a standalone thanks to Forest’s keen details and thorough building of the world. The characters are delightful with the focus remaining primarily on the perspectives of Suli, Arta, and Benno but other characters are seen throughout as integral parts either as threats or help in saving the prince’s life and his throne. The Cursed Amulet is a delightful read that all ages will love with a world that will introduce you to shapeshifters, wise women, a thrice-cursed prince, a girl that can communicate with animals, a traitorous prime minister, and an unforgettable adventure.

The Cursed Amulet is a work of fantasy, adventure, and magic written for children by author Elizabeth Forest. The second book of the Crow Magic series, this fresh adventure sees fourteen-year-old Suli continuing her adventures as a trainee of the wise women, imbued with magic that gives her incredible powers, such as communing with animals and being able to fly. After Suli rescues a young girl, Arta, during an Arctic journey, a strange illness begins to sweep across the animals. Worse than this, back at home the Prime Minister is gearing up to take wise women off the face of the nation for his own sinister purposes.

Readers from middle grade right through into young adult (and beyond) are certain to adore this highly magical and immersive fantasy tale from author Elizabeth Forest. I particularly enjoyed the characterization of Suli, who puts kindness and her need to help those who ask her above all else but also has real grit and intellect that sparks just when it’s needed. The girl-power vibes in this magical atmosphere are strong and highly enjoyable and the addition of Arta adds a new dimension and stretches Suli towards a stronger new role as a mentor herself. The writing is top-notch, leaving readers wanting more on every page and flowing well with great timing, action, and dialogue. Overall, The Cursed Amulet continues a superb series with renewed momentum, and I would highly recommend it to readers who adore fantasy, animal magic, and strong female heroes.

The Cursed Amulet by Elizabeth Forest is the second book in the children's fantasy and magic series Crow Magic, preceded by book one, The Third Kind of Magic. While in flight with a flock of geese, a teenaged shape-shifter, Suli, witnesses an abuse that cannot and will not be tolerated, rescuing a girl named Arta from her tormentor. As a deadly plague begins to immolate the animals that Suri has long been able to communicate with and has befriended, she agrees to take Arta back so Suli, with the ability to see, protect, and heal, can try to put her power to its intended use. When the cause comes to light and its darkness begins to suck the life and magic from the realm, Suli must harness all the strength she has left to save her friends, her mentor, her people, and herself.

Elizabeth Forest has built an extraordinary world in The Cursed Amulet, and Suli is the perfect protagonist for saving it. Courage and compassion were the two standout layers of this multi-faceted character; a changeling that also happens to be a fourteen-year-old girl. The writing is tight and straightforward, with flourishes of scenery and action that carry an ambitious plot. I enjoyed the shifting points of view as these allowed me to see Forest's world beyond Suli's perspective without compromising the suspense or revealing what is to come along the way. Obviously as a parent to a teenaged daughter, I found this book to be particularly significant, but what surprised me the most was that Forest was able to keep an adult reader wholly engrossed in the storyline...so much so that I was unwilling to give my kid a chance to read a book written for her age group before I was done with it myself.