The Global Web of Cannibals Livvy and the Enchanted Woodland Aging Gracefully for Women Over 50 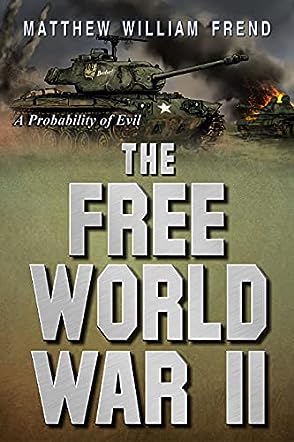 Matthew W. Frend has lived in Australia, USA and Scotland. He lives by the Benjamin Franklin credo of "Either write something worth reading or do something worth writing". A diverse background includes time spent in the Australian Army, racing stables and two decades as a computer programmer.

Arjon and his partner live an idyllic existence in a utopian future, now set in the year 2268, where peace and prosperity prevail. This has been made possible by historical events which culminated in the defeat of tyranny in a prolonged world war. Looking for clues as to how the new order came about, Arjon uses computer-generated simulations to explore pivotal moments from the archives. He concludes that had the American General George Patton survived a motor accident during the closing stages of World War II, it might have changed the course of history. Patton’s aggressive leadership style and political influence may have seen that war extended to achieve the defeat of Soviet Russia and ultimately communism - changing the global balance of power forever. Matthew Frend uses the second volume of The Free World War series to explore the Allied forces' post-World War II struggle to block communist expansionism, while still fighting the remnants of the Soviet army in eastern Russia. China embarks on a massive armaments build-up, using plans provided by a deposed but very much alive Joseph Stalin. Patton joins General Douglas MacArthur to spearhead the action, which takes place in the 1949 to 1950 period. As the battles continue to rage, the world is left with the prospect of further atrocities, plus the specter of nuclear annihilation, but hope remains that the Allies will prevail.

Matthew Frend has meticulously researched the post-World War II era and interweaves accepted historical facts with an alternative scenario made possible in the future by artificial intelligence and virtual reality. This volume of The Free World War, A Probability of Evil, moves on to new battle scenarios in the Soviet-controlled East, Korea, and Tibet. It is a gruesome affair with infantry, artillery, tank warfare, and aerial bombardment all graphically described with commendable attention to detail. The plight of the foot soldier is examined, along with the moral struggle that either prompts or, at times, forces them to kill in the name of ideology. The question of governments being seized by ambitious individuals in the name of the people is a recurring theme. The book mirrors the tense political situation that prevailed in the post-war period and the repression and genocide which continued unabated. An interesting aspect raised is the spiritual tradition of Tibet, where the belief in reincarnation supports Arjon’s quest to research the existence of the soul. In addition, the killing and lack of compassion shown by totalitarian regimes are the very antitheses of Buddhist teachings. It is an enthralling view of what might have been and the next volume is eagerly awaited.