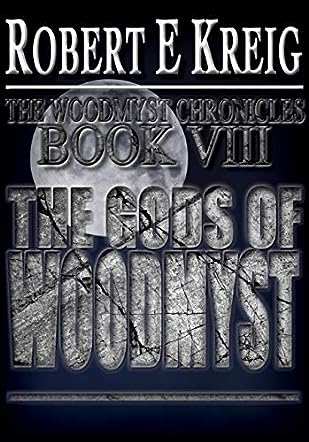 Alice had a mission; she needed to hunt down her aunt, and kill her. She had battled with Agrodien warriors, stood against Night Demons, claimed a dragon, and so much more, and yet this task felt monumental. The reality of her choices was bearing down on her, like the mantle of leadership she had acquired. Scarred by past events, she finds herself torn between loyalties. But the brides of the Magi have established strongholds, they have ground and power, the odds seem against them. Where there is tyranny, a resistance will form. Uniting the people, however, is more difficult. Blood will be shed, lives will be lost, and even that may not be enough to stem the threat. The power of the gods is with the four, but will it be enough, or have trials intended to temper them driven them from their once clear path?

The Gods of Woodmyst is Robert E Kreig's eighth instalment in the fantasy series, The Woodmyst Chronicles. I have followed Alice's adventures from the start, and her growth never fails to impress me. A child becomes a courageous young woman at the head of a force to be reckoned with. Graphic descriptions make for intense and gripping reading as the scenes of camaraderie, fear, and bloodshed are laid before you. Relationships are forged, tempered, and stretched to their limits. Difficult choices have consequences, and you can't help but be drawn into the emotional turmoil. Another well-crafted and executed story that will scratch the itch of fantasy lovers seeking action, magic, and madness.

I find something exciting about a struggle between women. I mean a real struggle, a war, where the fate of people is at stake. Sure, men still do most of the actual fighting but when the big decisions come down to the will of a small group of women, it all seems more intense somehow. This is what we have in The Gods of Woodmyst by Robert E. Kreig. Two sides both represented by a strong, close, group of determined women. You just assume there are going to be problems and pain ahead and you would be right. I liked The Gods of Woodmyst. I liked the world. A world of magic, surprises and pain. A world of reptilian soldiers and mad gods. A feudal world where somehow all the real power ended up in the hands of women. For some reason, it reminded me of Vikings and Norse mythology. I like that too. The Norse gods were one of my literary first loves.

I like Robert E. Kreig’s writing style. It is strong and emotional without being too dramatic or sappy. He writes women well, along with reptiles and men. I found the setting much enhanced by his word choices and use of description. This is a dark, gloomy world but Mr. Kreig doesn't hit you over the head with a hammer to let you know that. It is simply woven delicately through the story. The characters were great. This is one of those rare books where I didn't have a favorite because they were all done well. They all stood out and made a strong contribution to the story. The plot was also done well and moved the story along at an appropriate pace. I wasn't rushed but I wasn't bored either. All in all, a very good book.

The Gods of Woodmyst by Robert E. Kreig is the eighth installment in The Woodmyst Chronicles series, following its predecessors (all “of Woodmyst”) The Walls, The Sons, The Heir, The Warlords, The Huntress, The Shadow, and The Brides. Because this series is truly a saga and Kreig has built a world with multiple fully-fleshed characters and story lines, this book would be difficult – although not impossible – to read as a standalone. The Maji and all nine queens have implemented a bloody civil war through dominant, restrictive oversight to secure a firm grip as opposition to the rulers comes to a head. Unsuccessful against the power of the Maji and his queens, the bloodshed continues and the only hope of salvation for the people comes in the form of The Four.

Robert E. Kreig opens up The Gods of Woodmyst with one of the best prologues I have ever read. It is ominous and violent and terrifying to the same degree in which it is also fantastically vivid and wholly engrossing. It sets the tone immediately for what is to come and Krieg delivers with gusto. The writing is sharp, giving way to several characters that, miraculously, through distinctive personalities and equally singular dialogue, stand independently of one another. I always understand who is who. It's helpful that the books in Kreig's series are tight in both pacing and length, and I hope to see The Woodmyst Chronicles reach the wide audience of readers it deserves. Highly recommended for even the most devout lovers of epic fantasy.