Beyond the God Sea 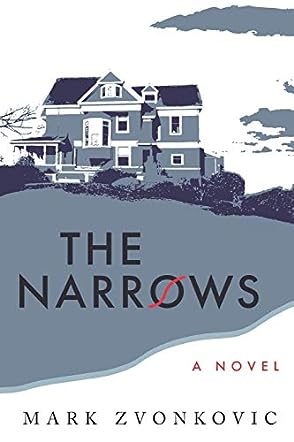 The Narrows by Mark Zvonkovic takes us back to the late sixties/early seventies in a psychological tale about cult addiction. Larry Brown and his longtime pal Hal, in a Cambridge, Massachusetts bar, witness a ruckus in which two oddly clean-cut young men wrestle with another, the dispute unknown, though the name Misha keeps coming up. Later, Larry witnesses the attacked fellow as a corpse being drawn out of the Charles River. For some pages, this mystery is absorbed in the comings and goings, and the thought stream of Larry as he deals with his large family (his parents are both literature professors). His pressing problem is with his supposed girlfriend Millie, who Hal claims is betraying him. At a reception held by his father, Larry meets Jenny Barrows, who reveals that her brother Josh is ensconced in a cult called the Path of God, led by a prophet named Misha. Josh resides—or is held—in a so-called ashram somewhere on Cape Cod, where Larry’s family has a summer home. Larry’s cousin Bradley lives in the ashram too. Jenny and Josh’s dad has involved a deprogrammer in a plan to intervene and rescue Josh. Larry and Hal join up too, on behalf of Larry’s cousin. A plan is hatched, and among deep discussions of life’s realities and non-realities, the four (Larry, Jenny, Hal, and the professional interloper) make their move.

I enjoyed Mark Zvonkovic’s novel on several accounts. First, there’s the straight-on mystery/adventure element of the rescue attempt. Second, there’s the larger issue of cults—their addictive appeal and what to do about them. Third, there’s the whole investigation of consciousness and methods of transcendence to find permanent peace and happiness; and fourth, there’s Larry’s meandering voice as he struggles with his family and friends. A Harvard grad, he is a junior high school English teacher up for tenure, and in his ruminations the name Daedalus appears (Molly too), main characters of James Joyce’s Ulysses, a masterpiece of stream-of-consciousness. The Narrows is written much in this style, slipping in and out of Larry’s thoughts, reasonings, speculations, and even his dreams. Written in the first person and present tense, the narrative keeps us in Larry’s head all the time, along with deep conversations about the nature of reality and some suspenseful action. Finally, I particularly enjoyed the Salingeresque tone, almost as if Larry is Holden Caulfield grown fifteen years older, with many of the same struggles and ironic observations. Holden’s famous words—goddam, lousy, phony—come up along with Larry’s similar sexual struggles and thought patterns. Also, his give and take with his little sister and the dream image of a man walking toward a cliff. Mr. Zvonkovic has tackled serious issues here, along with an appealing personal touch and brilliant descriptions of the Boston and Cape Cod areas.

When Larry Brown witnesses a boy being confronted by two men who want the boy to leave against his wishes, he doesn't know he will later face a situation that is, in a way, linked to the incident. Set in the 1970s, The Narrows focuses on Larry Brown, a public school teacher in Medford who is on a mission to rescue his cousin and a friend's brother from a religious cult with the help of Black Lightning. Black Lightning is a man who considers it his duty to kidnap people from cults, deprogram them, and set them free. As the plot unravels, Mark Zvonkovic engages the audience with educative conversations, thoughts about several psychological and philosophical ideas, and fond and painful memories of the characters.

The Narrows is what you get when you mix strong character development and voice with some ideologies and concepts that inspire people to think further, or at least, make them realize that they are not alone in contemplating them. I was fully absorbed in the discussions about literature, racism in the educational system, intelligence, brainwashing, free will, goals, and other philosophical and psychological topics. The first-person narrative brings its protagonist to life by portraying him to have relatable flaws, feelings, and conflicting values, which made me feel for him and easily connect with him. Mark Zvonkovic builds a story around real social issues of the United States in the 1970s, and it exposes the good and bad of humanity with some humor. I had a great time reading The Narrows; it is perfect for readers who love to challenge themselves mentally.

The Narrows by Mark Zvonkovic is a literary fiction novel that centers around its main character, Larry Brown. The book begins with Larry's backstory as he recounts his relationship with his childhood, his family, and his girlfriend Millie, an extrovert thespian who flirts with and comfortably changes clothes in front of handsome leading men. The story is told entirely in the first person by Larry, shifting back and forth between the present and his recollections of moments in his past that shaped where he stands as he narrates. In the throes of all of this, Larry finds himself on a mission to pull his cousin out from a cult, working alongside a professional known among the cult as Black Lightning, the man who is able to 'kidnap' cult members for deprogramming and, ultimately, safety from both the cult and themselves.

The Narrows is a fantastic piece of literature that does exceptionally well at allowing its protagonist to navigate a juggernaut with an intelligent, character-driven arc that elevates an already unique plot. Mark Zvonkovic provides Larry with a fragile resolve that lends to his authenticity as a character even when the narrative Larry delivers feels strong. He is insecure and profoundly human, a combination that makes his arc so much more believable. The other characters are equally intriguing and, as the tension builds, it is easy to forget that the story is actually taking place over a mere matter of days. I liked Jenny, whose brother is in line for extraction from the cult alongside Larry's cousin, and how the pair comes to terms with their loved ones having such degrees of brainwashing that their thought process is unrecognizable. Overall, this is an excellent book and I have no doubt other readers will agree.