Poems from the Summit of the Pit 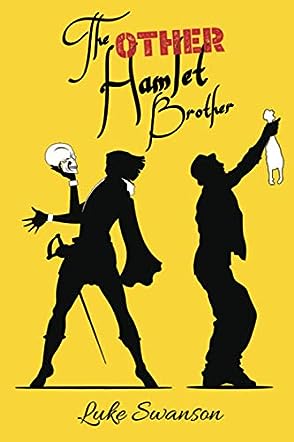 The Other Hamlet Brother is a fantasy tragi-comedy written by Luke Swanson. Incorporating some of William Shakespeare's famous characters and storylines, Luke Swanson's novel feels like a fantastical satire on Hamlet. Newly crowned King of Denmark, Claudius feels worried about his nephew's mental health. On his chief counselor Polonius's advice, he sends an ambassador to London to summon Hamlet's identical twin, Tim, a struggling playwright. Meanwhile, Johan Hamlet's spirit visits Tim, informing him of Claudius's role in his untimely death. Feeling a sense of duty to his homeland, Tim sets out for Denmark but faces significant hurdles on his journey. He also forms a sort of kinship with the likes of Nick Bottoms, Romeo Montague, Constable Dogberry, and the Earl of Kent. Upon his arrival in Denmark, Tim finds himself amongst another group of actors.

The Other Hamlet Brother is a humorous and entertaining rendition of Hamlet with a unique twist. Author Luke Swanson's hilarious and seamless incorporation of William Shakespeare's characters makes the book a blast to read. Every single character feels colorful, with a distinct personality that makes them pop out of the page. The narrative is fast-paced and filled with twists and turns to keep you glued to the pages. The dialogue is crisp and laden with wit and humor. I particularly enjoyed the group dynamics and banter between Tim's friends on the isle of the sorcerer, Prospero. Despite the light-hearted tone of the narrative, I found the climax somewhat bittersweet. If you enjoy the works of William Shakespeare, I highly recommend The Other Hamlet Brother.

If you were to take Shakespeare’s best known plays, toss in a dollop of Monty Python, add a pinch of A Knight’s Tale, and stick the whole thing in a blender for a minute, you’d have The Other Hamlet Brother by Luke Swanson.

Tim Hamlet is the less depressed and less manic identical twin brother of the Hamlet we’re all familiar with. Tired of being in his unreliable brother’s shadow, Tim moves to London at the tender age of 15 to become a playwright. When an envoy sent by his Uncle Claudius summons Tim home to help deal with the fractious Hamlet, Tim decides this would be a good opportunity to take a break from his less than successful theater career and try to mend the rift between himself and his family. Tim’s journey home is more adventurous than expected, and along the way, he meets a number of characters that will be familiar to anyone with the least bit of Shakespearian knowledge – Nick Bottom, Romeo Montague, Prospero, Caliban, and Miranda, just to name a few. As Tim approaches his hometown of Elsinore, he meets up with a band of actors. While traveling with them, he discovers a mysterious play script that changes everything he ever thought about himself and his family and dictates everything that follows.

This utterly unique and quirky novel had me captivated from the first chapter. Calling it humorous or satirical doesn’t do this story justice, because it’s also a heartfelt and brilliant reimagining of stories that we’ve all grown up with. The sly wit that Mr. Swanson artfully includes in the dialogue is equal to what we expect to read in the Bard’s writing. On the flip side, this story also deals with weighty topics such as fate versus free will, honor, the dynamics of a dysfunctional family, and finding your reason for being. The story moves along at a good clip, yet spends enough time on each part so that you see Tim develop a stronger sense of self and lean into his part of the tale.

Luke Swanson has managed to create a story that swings between comedy and tragedy without missing a step. His clever writing keeps you on track and firmly fixed in the action. Fans of Shakespeare will appreciate the fresh twist on the classics, and I highly recommend this book for fans of satire, drama, adventure, and fantasy. An absolutely stellar read!