The Return of the Scoundrel 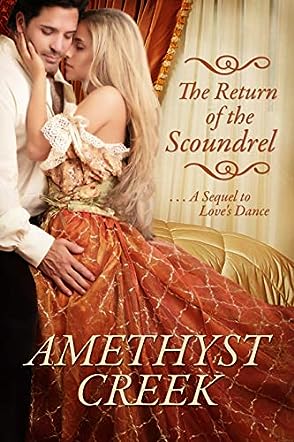 Amethyst Creek and her husband live in colorful Colorado. They love spending time with family - in particular their sweet granddaughter, Lily. Amethyst holds a Master's Degree from the University of Denver. She is an avid reader and history has always been her favorite subject. She is the author of four historical romance novels.

In Amethyst Creek's The Return of the Scoundrel, Libby would never have found out about the teaching post if not for her brother in Leadville. Eager to begin a new life and role, she moves to the expanding city, stopping by to thank her brother on the way through. But it seems her life is set to change in more than one way as her path crosses with her brother's friend, Richard Rutledge. This smooth man navigates his way into her affections with ease, showing a flattering interest in her life and new position. While in Greeley, she catches the eye of another man, Joseph. But one of these men has their own interests at heart in befriending her, their own agenda and desires in which she is just a pawn to be used. Will she uncover the secrets that lie in wait, or will she be swept along for a ride of revenge?

Amethyst Creek's The Return of the Scoundrel has a very complete and holistic feel to it. Within the pages, you get a keen insight into the trade, foundations of the town and city, and the community, along with their beliefs and attitudes. I enjoyed how the accessible equipment accurately reflected the era, and how it was used to set scenes and build an atmosphere that either gave us more insight into the town or the people. It is clear a lot of research went into crafting this story and making it as realistic as possible. From the notes about mining to the production of butter, you are really given a sense of the time, resources, and way of life. There are many characters building the community, and while we learn of some, the central role is taken by a few, allowing the reader to become more familiar with their part in the story. The slow pace allows a wealth of information to be conveyed, as the plot of growth and expansion is intertwined with threads of love and affection. The manner in which this was written means it could easily be a true story rather than fiction with a foot in past events and, from the notes in the back, there are some subtle parts that were based on real events and people. Romance, manipulation, and unity make up this historical novel and will give anyone reading a quick glimpse into a time long gone by.