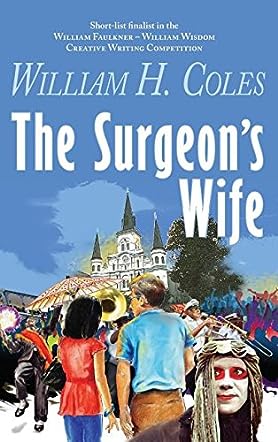 The Surgeon's Wife by William H. Coles is an audiobook that explores the complicated relationship between two medical professionals in New Orleans. Clayton Otherson has been Mike Boudreaux’s mentor and the man who brought him on board. Clayton is getting old and his practice as a surgeon is featuring errors that can be deadly to patients. As the head of the management of the operation room, Mike disciplines Clayton and puts restrictions on him. It is something that Clayton doesn’t take in good faith, and to make matters worse, Mike eventually develops an affair with Clayton’s wife. Clayton is now a man whose pride is deeply wounded. Can he handle thoughts of revenge and his psychological state that teeters towards insanity?

A compelling psychological novel with a strong plot, The Surgeon's Wife is a story that is very entertaining and that explores human conflict. Themes of love, profession, power, and the quest for revenge are well-developed. I have read other books by this author, including his nonfiction book, The Art of Creating Story, and the novel, Sister Carrie, and they were wonderful reads. The Surgeon’s Wife carries his usual signature for plot and character and a writing style that forces the reader to follow the characters as they evolve through the conflict. The audiobook is narrated by the author in a voice that is strong. It is clear and the tone reflects the general atmosphere in which the conflict develops. William H. Coles is a gifted storyteller and his books have the kind of entertainment that I look for as a reader.

The Surgeon's Wife by William H. Coles is a mix of romance and family dynamics, a novel that follows two surgeons through a powerful conflict. Mike Boudreaux is a surgeon in New Orleans, mentored by Clayton. Clayton is more interested in trauma surgery, and the problem is that Clayton’s surgeries leave patients with injuries and unpleasant outcomes. As head of the Operating Room Committee, Mike is forced to place him under restrictions and Clayton takes it badly. Things become more complicated when Clayton’s wife falls in love with Mike. It is an unforgivable blow to Clayton who feels deeply betrayed and this affects his mental health terribly. What happens next?

Filled with drama and unpredictability, The Surgeon's Wife pulled me in right from the start. William H. Coles does a great job of exploring the complicated relationship between Mike and Clayton and I particularly enjoyed how Coles writes the conflict. The premise is very strong — the mentee has to make difficult decisions to discipline his mentor. The world of the characters is beautifully portrayed in the writing and if this author isn’t a medical practitioner then one must suppose that he did a wonderful job of researching the novel.

The Surgeon's Wife has strong plot points; it is fast-paced and has characters that are compelling and believable. It is hard not to have pity for Clayton. Mike has his own stressful moments and readers watch as he deals with complicated situations. The audiobook is read by the author and it is something that I liked. It feels like someone telling a story naturally to an audience in a clear and engrossing voice. The audio is professionally recorded and clear.

The Surgeon's Wife by William H. Coles is a romantic/medical drama that readers of both genres will enjoy. The story follows Mike Boudreaux as he is caught in a moral dilemma. Mike looks up to Clayton Otherson who is his mentor. No one is more shocked than Mike when he falls in love with Otherson’s young and beautiful wife Catherine. They both develop feelings for each other and soon they have an affair that changes everything. Things become even more complicated when Mike has to correct Clayton for mistakes he makes by injuring his patients. From there, things go downhill and soon Mike has more than his career at stake if things don't get better soon. Will Mike be able to hold on to his job and keep his relationship with Catherine intact?

While William H. Coles is not a professional voice over artist, he does a great job of narrating the story and adding his essence to it. His tone is perfect for the story, he keeps his cadence low and allows the tone of his voice to draw readers in. I enjoy the soothing quality of his voice and how he brings his story to life. I love how the pace of the story builds as the story progresses. The story opens a little slowly, but it moves on and picks up after a couple of chapters. The development of the plot is great, the characters get plenty of opportunities to grow and the author does a great job with showing their arcs in the best light. The whole story is very much character-driven. There is a spark in Mike and how he is portrayed. He just made me read on and not stop until I reached the end. William H. Coles's characters grew at their own pace and let readers know they are the ones who created this story. The author also does an incredible job of making readers feel the emotions his characters are feeling.

The Surgeon's Wife by William H. Coles is a compelling audiobook that follows sophisticated characters through a grueling conflict. Set in New Orleans, it introduces readers to the complicated relationship between Clayton and Mike. Clayton is Mike’s senior, an older practitioner in the field of surgery. As he advances in years, he begins to commit errors that are dangerous to the lives of patients. As the head of the Operation Room, Mike must act, so he puts Clayton, his mentor, under strict discipline. Clayton doesn’t take it well and the situation escalates when Mike starts having an affair with Clayton’s wife. Will Clayton lose both his wife and his dignity without a fight?

What is fascinating about this story is how the author builds up the tension. The conflict begins with what can be considered malpractice and slowly escalates when Clayton’s “pupil” disciplines him. The author exploits Clayton's ego and Mike's unfortunate choice to get closer to Clayton’s wife. William H. Coles builds a conflict that quickly explodes. The plot, in the author’s characteristic style, is tight and cunningly written. The characters are real and multilayered and readers can’t help following them, wanting to know the outcome of the strained relationship between Clayton and Mike. The Surgeon's Wife by William H. Coles is narrated by the author — a voice that I have become so familiar with — and it is clear and arresting, allowing the drama to come out through the narrative. Great pacing and good audio sound.

The Surgeon's Wife by William H. Coles is, in the author’s characteristic style, a character-driven story that follows two multidimensional characters in a conflict that involves profession and love. Clayton is an experienced surgeon who mentored Mike. Clayton is older in the profession and his age also leads him to commit errors that put the lives of patients in danger. Mike is the head of the operation room and he takes steps to discipline his older colleague, even if it hurts him. While this seems like an insult to Clayton, the insult becomes aggravated when Mike starts seeing Clayton's wife with whom he develops a strong emotional connection. Can Clayton take it?

I have read and listened to many of William H. Coles’s stories and what has always fascinated me is the way the author crafts characters and the kinds of conflict he puts them into. His characters are always sophisticated and the author uses a flaw in them to put them into difficult situations. The conflict in The Surgeon’s Wife explores the differences between two protagonists and the author uses Mike’s desire for the wife of his colleague and mentor to build the conflict. What is interesting is the way I felt for the characters. While I admired Mike, there were moments I felt so strongly that he betrayed the hand that once fed him. It is easy to feel sympathy for Clayton, but he is also a headstrong character and a man with overweening pride.

Narrated by the author, The Surgeon's Wife grabs the attention of the reader from the very first moment. It is emotionally intense; the author is so clear and, as the narrator, his voice is strong and compelling. It allows the drama and the conflict to come across clearly to readers. It was a fun ride for me.