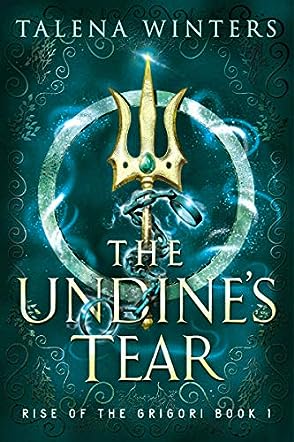 Talena Winters is addicted to stories, tea, chocolate, yarn, and silver linings. She writes page-turning fiction for teens and adults in multiple genres, coaches other writers, has written several award-winning songs, and designs knitting patterns under her label My Secret Wish. Master of the ironic GIF response. She currently resides on an acreage in the Peace Country of northern Alberta, Canada, with her husband, three surviving boys, two dogs, and an assortment of farm cats. She would love to be a mermaid when she grows up.

The Undine's Tear by Talena Winters is the first book in the Rise of the Grigori series. Calandra has always known she has a destiny, one that will save all of the undines, thanks to her power of healing and her bonding with a human. Her destiny may be clearly laid out in front of her, but a promise to a human named Osaze to free him could prove costly for her. She has a problem when her powers aren't growing stronger and instead seem to be growing weaker. A shocking secret comes to light that leads Calandra in search of a brother she never knew she had while she seeks to fight the madness that led to the downfall of Atlantis. Elsewhere, Zale makes a discovery of his own when he's visited by a strange presence and embarks on a journey to find his sister while trying to get a handle on his elemental abilities.

The writing has an elegance to it that brings details of the world to life and takes you into an epic fantasy world woven with vivid descriptions. Talena Winters has created a world that puts the epic into fantasy with lush surroundings and an amazing setting. Calandra has her whole destiny set out before her since the moment she was born; on a path to be the savior of her all-female race of undines which comes along with advanced healing abilities. She's expected to stay the course of her destiny and for her people, but her journey isn't an easy one as she develops a rebellious side while discovering what's the best future for herself, even if it means keeping secrets.

The tone of the story is one of discovery and is reminiscent of a hero's quest which Winters delivers with strong-willed and layered characters. Calandra's relationship with Osaze is a key component to the story as her feelings for him create a catalyst to defy her position by keeping secrets and has her making a choice. This also adds an undercurrent of romance in the story with another layer to Calandra's journey, which focuses on her power, her heart, and her duty. The Undine's Tear is an epic journey about destiny, self-discovery, secrets, and charting your own path with stunning writing, vivid descriptions, and endearing characters.

The Undine's Tear: Rise of The Grigori Book 1 by Talena Winters tells the story of Calandra, a member of the Undine race who must use siren magic to form a bond with a human. She is expected to follow the rules, but Calandra doesn't always do as she is supposed to. Her brother Zale isn't doing much better. He is trying to shed his old life, but instead, he finds himself thrown back into it when he is told he is important and must save his family. The story was well developed and I enjoyed reading it to find out what would happen next. Calandra is a great character and I think the book could appeal to male and female readers because of both leads, but it would definitely appeal to teenage girls the most.

Talena Winters has written an interesting book with The Undine's Tear: Rise of the Grigori Book 1. There is a lot to unpack and the two main characters start off on separate missions before they collide. The book was well written and I think young adults would love it. The main characters have a lot on their shoulders but they know they must do the right thing for their families. It did get a little confusing in places with the time jumps, but it all came together well in the end. It had a decent pace and I loved reading about this race and what they could do. I would recommend it to fantasy and young adult fans.

The Undine's Tear is the first book in the Rise of the Grigori series by Talena Winters. An epic fantasy set in an imagined world that is filled with magic. The story follows Calandra, a compelling female protagonist who is born to heal her people. There are restrictions on her power to heal which make her unable to save her childhood friend Osaze. At the time that her healing powers are diminishing, a terrible curse is sweeping through the land, attacking other healers with madness. Meanwhile, her brother, Zale, a merman, faces his own darkness in a distant land, worried about saving his mother and sister. He has strong powers, but can he control them and come to the aid of Calandra and his mother? And can Calandra find the answers and stop the mysterious attack on her people before she becomes a victim herself?

This is a well-plotted story with characters that I enjoyed. The protagonist is perfectly written and her devotion to healing her kind and the commitment to fulfilling every one of her promises are defining traits of her personality. She is also flawed, and I loved watching her struggle, wanting answers and accepting help from her friends, especially Osaze and Tanni. The Undine's Tear transports readers into an exotic setting where the magical life of the people is disrupted by a dark curse on the land. Talena Winters writes in prose that is elegant and doesn’t waste words. The descriptions are gripping and the imagery strong. It is very imaginative and pulls the reader in from different angles — strong writing, unpredictable plot, memorable characters, and a setting that is brilliantly written.

The Undine's Tear is the first book in Rise of the Grigori series by Talena Winters, a colossal fantasy tale that features exceptional characters with supernatural qualities in different worlds and bound by a common destiny. Calandra is born to heal and she has dedicated her entire life to that mission — using siren magic to heal her all-female race. She is unable to free Osaze, a childhood friend, as her powers continue to wane. She is a troubled soul, worried about her island and the madness that is falling upon other healers. Her brother, Zale, a merman, discovers that he is the first of his kind to be alive in three thousand years. He is on a mission to save his mother and a sister he has never met. Can he control his elemental powers and his save mother and sister, and can Calandra save Osaze and the other healers of her land before they are consumed by the encroaching darkness?

This book is a spellbinder for those who love epic fantasy with monumental characters. Talena Winters puts much work into building characters that are complex and multidimensional, weaving magic and special qualities into them. It is a tale that transports readers into a world that is exciting but filled with pain, uncertainty, and manifold threats. There is a madness falling upon the healers in the land and this makes Calandra desperate to find answers and to help her people, and this is the pillar on which the exciting plot is built. Her friends, Tanni and Osaze, play great roles in her adventures and quest. Calandra’s story connects with her brother’s in a fascinating way. The Undine's Tear is cleverly plotted; it features characters that are fully drawn and that evolve through an epic conflict in believable ways. This first entry is a spectacular, haunting tale of survival, the beginning of a questing adventure told by an expert storyteller. I am looking forward to the next book in the series!

The Undine's Tear is the first book in the Rise of the Grigori series by Talena Winters. The story follows Zale and Calandra, siblings who never met each other, but the world's future hangs on their shoulders. Calandra was scared of the Madness that plagued her kind. All her life, she did what was asked of her and kept doing her job as a healer. However, one misstep and Calandra was now slowly losing her powers. But she had a destiny to fulfill, didn't she? If she didn't have her powers, who would protect her island? Zale had always tried to hide his real identity, but it seemed like it was not possible anymore. However, when someone strange told him that only he could save his mother and the sister he had never met, he knew he could not turn his backs on them. But could Zale do it? Was he even capable of embracing his real self after suppressing his true identity for years?

The Undine's Tear is the kind of young adult fiction that I love to read. Zale and Calandra were both characters that drew the story forwards and added more depth to the plot. Both of them had their plotlines that Talena Winters did justice to. The pace was perfect and allowed the multiple points of view narrative to thrive. The character development was on point, and each of them was given plenty of page space to grow right in front of readers. The action never stopped. While Calandra was getting desperate and scared, Zale slowly gained confidence as he let his nature take control. It is a brilliant start to a new series that I have high hopes for. Superbly composed to entertain for hours!