The Cry of a Raven The White Birds of Morning 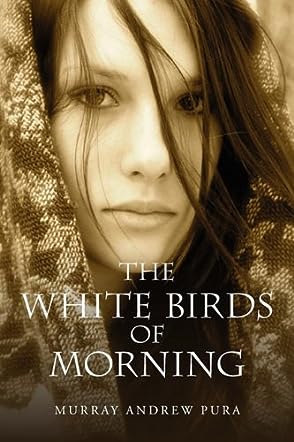 The White Birds of Morning: Saint Zoya’s Dance, Book 2 is an historical fiction novel written by Murray Pura. While this is the second book in the series, the author provides sufficient background details to allow it to be read as a standalone novel. Brother Nahum would much rather have remained outdoors making sure that the roads and paths of the Trappist monastery were free of the snow that blanketed the earth, but he knew that was not to be. The procession of vehicles following the road carried musicians who had come together to perform a series of pieces created in honor of his sister, Zoya, who some in the church were campaigning for a declaration of sainthood. Brother Nahum’s abbot was one of those advocates and had gladly acceded to the Vatican’s request that Brother Nahum be made available to Archbishop Frederick. They had met once before, and Andrii, now Brother Nahum, had hoped his reticence would have discouraged future visits. Dom Alexander, who had recently died, would have protected him from these forays into the past, but the new abbot was unconcerned and not cognizant of the toll those memories placed upon him. Vows of obedience did have their repercussions. Once the Archbishop and Brother Nahum’s meetings began, however, the memories seemed to flow seamlessly.

The White Birds of Morning is as grand and sweeping as the vast plains of Canada where Andrii’s family settled, or those Asiatic steppes which provide much of the setting for this book. The story follows the lives of Andrii and those of his family, who emigrated to Ukraine, from 1933 through to the failure of the German assault on Russia. It begins with Andrii sharing his own personal account of the Holodomor, the widespread slaughter of millions of ethnic Ukrainians at the order of Stalin. He and his family had inadvertently stumbled upon one such site. The guards who had accompanied them had been shot by the authorities. The memories of those dead innocents were imprinted in their minds and had forever dashed their hopes for building the Soviet utopian vision. Zoya, the sister whom the church wanted to canonize, had remained with their parents in Canada, but she too would be drawn back to their roots in Ukraine where miracles began to happen at her touch.

The White Birds of Morning is a beautifully written and flowing historical novel that focuses on Ukraine during the Second World War. It’s also a compelling family saga which follows the life of a Canadian professor of literature who is thrust into a world of intrigue, and the extended family whose lives are so closely linked with his. Pura’s characters are larger than life, especially the scholarly Andrii, whose official role as a political analyst and propagandist leaves him dancing perilously close to death as he attempts to save as many lives as he can. His growing relationship with Ivanna, his red-haired driver, is punctuated with timeless images: their first shared boat ride, the evenings spent reading together by firelight, the moment she declares her love for him. Pura gives the reader much to consider while reading this book, which at times echoes the solemnity of Tolstoy’s War and Peace, the philosophical complexity of Mann’s Magic Mountain and the grand vistas of Robertson Davies’ Deptford Trilogy. I loved being privy to those evenings Andrii and Ivanna spend reading the great works of literature and those discussions about art, truth and God, even as I was disturbed by the sentiment expressed by some that somehow Hitler’s Germany was more acceptable than Stalin’s Russia. This thought-provoking and often provocative novel is a grand read. The White Birds of Morning is most highly recommended.

The White Birds of Morning is a work of dramatic historical fiction penned by author Murray Pura. Set during the climactic events and fallout of the Second World War, the plot first focuses on Andrew Chornavka, who is in hiding at a monastery among Trappist monks. When Andrew is once again forced to unlock the secrets of his past by a papal delegation, he must unveil the darkness and light within his own family history. There is peace and war and blood on both sides, but with his sister Zoya on the verge of declared sainthood, Andrew will bring unflinching honesty to a man who never expected to hear it.

Many sections of this novel almost read like a biography of Andrew’s life and that of his family, taking us many miles across the devastation of the Second World War, particularly on the eastern front of battle, a less reported area of conflict. It was interesting, culturally, to see Trappist monks at the forefront, giving a religious perspective on the war that was intriguing, and to see so many less represented nationalities and what part they had to play in the war. I think history enthusiasts are sure to enjoy The White Birds of Morning for these reasons, though lovers of historical romance will need to persevere through author Murray Pura’s extensive history to get their satisfaction from the tale as well. Overall, The White Birds of Morning is an extensive read, but one peppered with excellent and unusual history.

The White Birds of Morning by Murray Pura is a fictional novel set in Eastern Europe during the Second World War. Hidden away in a Trappist monastery, Andrii Chornavka reluctantly tells the story of his family and their involvement in Stalin's Communist revolution during the beginning of the Second World War. The Vatican wishes to know more about his sister's activities as they pertain to her forthcoming canonization. However, as Andrii's story slowly unfolds, it is clear that this is a story that may not be what they expect or even want to hear. Andrii's father originally took the Chornavka family from Ukraine and emigrated to Canada. Forty years later, many of them return to help further Stalin's revolution. However, Andrii quickly realizes that all is not well and that Stalin has betrayed them.

The White Birds of Morning is brimming with historical events, rich in dialogue and shot through with political intrigue and religious fervor. It speaks of a long-lost era and captures the intensely dark mood of the time. I felt a lasting impression of life in Eastern Europe. I couldn't help but be moved by events, including the Holodomor, where millions died of starvation in Soviet Ukraine. This book is full of conflict, both personal and political. The vagaries of war are shocking but its barbarism is somewhat softened by a rather strange love story. Murray Pura writes haunting literary fiction with a strong Slavic flavour. Those who like to lose themselves in long historical novels set during the Second World War will enjoy this book.