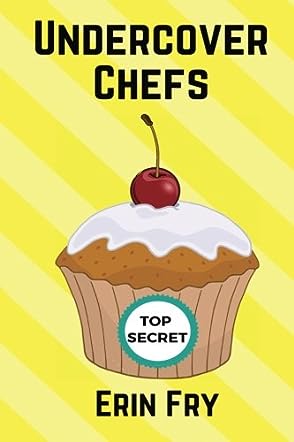 Undercover Chefs is a coming of age novel for preteens and young adults written by Erin Fry. Isaac Mitchell was born to run; he was an intuitive, graceful and very fast runner who Coach Rosas was thrilled to have as a part of his middle school team. What no one else knew was that Isaac was more than just a gifted runner and Junior Olympic hopeful. He conjured up incredibly delicious new culinary masterpieces in his mind as his feet tore up the pavement. Isaac wished he could let his mom know how much he loved baking with his grandmother, but his mom was focused solely upon his running career.

Jane Gray was a talented artist whose sidewalk drawings had won her local fame. Jane had been born in China but was adopted by her mom and architect dad. Her mom died when Jane was younger, and her dad and Gramps were the most important people in her life. Gramps had been suffering with a cough for a while though, and it was making Jane worry that she’d lose him as she did her mom. Gramps was her confidant, best friend and mentor. For comfort at the worst of times, Jane turned to baking, especially cookies like she and her mom used to make. Jane’s baking and art were her skills, her gifts, the things that make her feel complete.

J.C. Mendoza had had to grow up way too quickly. His mom was the sole parent of their family, and she was at work just about all the time. She expected him to get his little brothers dressed, give them breakfast and take them to school -- all before he got to class himself. All that care-giving and responsibility didn’t leave him much time to study or do his own homework, so when his mom took away his scooter as punishment for bad grades, it seemed as if the universe was unfairly conspiring against him. There was a contest coming up soon where he had a chance to be noticed and maybe get a sponsor, but how could he practice without his scooter. Still, J.C. delighted his little brothers with the imaginative and delicious meals he dreamed up for them each night.

Three sixth graders with ostensibly nothing in common -- except their culinary gifts -- are drawn together by the mysterious Cupcake Contest which offers a cash prize award for the school whose cooks create the most amazing and delicious cupcake. When they reach the classroom where the meeting for the contest is scheduled, they find a dusty, disused room filled with rocks and a diminutive elderly man named Dr. Gus, who may just be able to help them reach their dreams. Undercover Chefs is not recommended for anyone who is on a diet. There are way too many scrumptious-sounding dishes, cookies and muffins dancing through this inspiring and delightful story about growing up amidst responsibilities, parental and teacher expectations and classroom challenges. Fry’s three preteens are marvelous characters, and the recipes they seem to concoct out of thin air are prodigious indeed. I also enjoy culinary adventures and plan on trying a few of the recipes for which Fry includes links. Undercover Chefs is a grand, feel-good story, one that would make a profound, fun and inspiring movie. I’m hoping for sequels to this story. Characters this good deserve continuing stories. Undercover Chefs is most highly recommended.