Venom Wars of the Desert Realm 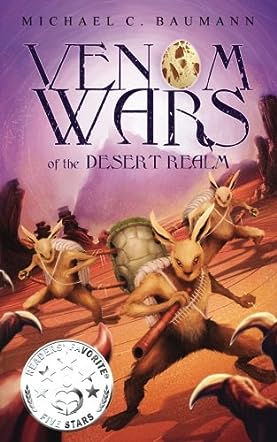 Venom Wars of the Desert Realm is a labor of love that came to life after years of stops and starts, tinkering, and at times thinking it would never be finished.

I wanted to create a fun fantasy adventure story for all ages, a story with classic good vs. evil elements; in the spirit of J.R.R. Tolkien and C.S. Lewis. The heroes are named after, and are inspired by my four children. The animals and environments of the Arizona deserts provided the settings and hosts of creatures big and small.

I was blessed to be born in Hawaii, and those amazing islands are the inspiration for the setting of book two, "Venom Wars of the Island Realm"

Venom Wars of the Desert Realm is a science fiction and fantasy novel for children and preteens written by Michael Carlton Baumann and illustrated by Keira Negali. The Venom-crazed frogs and their evil commander, the giant rattlesnake, Eelion, were swift and brutal as they attacked Aridin, the eagle king and ruler of the Desert Realm and his mate, Sparra. Their valiant efforts to defend themselves and their unborn son and royal heir, the Oonakestree, were doomed by the sheer number of the attackers and the dizzying effect they had on their prey. Sparra was bitten, and her body lay motionless as the poison worked its way through her system. Aridin was treated even more harshly before the attackers left, triumphantly carrying off the royal egg. The royal heir was to be exposed to the Venom and made an integral part of its poisonous and twisted growing force. Honu, the great tortoise, knew what had to be done; it seemed as if all the hundreds of years he had existed were preparing him for his part in the attempt to reclaim the Oonakestree and cleanse the Desert Realm of the Venom. As he spoke to the assembled elders, he referred to the Old Poem and was heartened to see that the elders all felt as strongly as he did that the Oonakestree must be found. The Poem spoke of three brothers who could win this fight against overwhelming odds, and Honu was convinced that he knew who they were.

Michael Carlton Baumann’s epic fantasy novel, Venom Wars of the Desert Realm, pits three orphaned sibling hares against legions of Venom-infused adversaries. As with Frodo Baggins, Tolkien’s unassuming hobbit, Nick, Cade and Sam have no idea how to be heroes, no inkling of how to save the Oonakestree, and following as they accept their destiny and face overwhelming odds is inspiring indeed. Keira Negali’s dark and marvelous images make the evil Eelion, elder Honu, and the unlikely trio feel real, and witnessing as Sam faces the gigantic rattlesnake is the stuff of high fantasy indeed. There’s always the danger that a fantasy or adventure book starring animals will be too tame for all but the very young, but this is definitely not the case here. Any reader who remembers Richard Adams’s adventure fantasy novel, Watership Down, or more recently Tom Hoffman’s marvelous fantasy adventures featuring Orville Mouse and Bartholomew the Adventurer, can attest to the power and magic of good animal-themed epic fantasy, and they will not be at all disappointed with the epic fantasy and heroes found within these pages. Venom Wars of the Desert Realm is brilliant, and it’s most highly recommended.

Venom Wars of the Desert Realm by Michael C. Baumann is an excellent adventure tale for young readers. It’s a classic story of good versus evil set in a world of intelligent animals. The dark forces of evil have defeated King Aridin, the brave eagle, and are gathering their forces to bring every good animal under their power. The dark side is made up mostly of reptiles and flying bugs. The side of the light is populated by birds, mammals, and some of the crawling insects. Our heroes are three courageous rabbits, young brothers who lost their parents years earlier. They are joined by a brave female owl in their quest to defeat the army of a giant lizard named Hillmaken.

All the elements of a heroic adventure are present in Michael C. Baumann’s Venom Wars of the Desert Realm. Our heroes, three rabbits and an owl, are lovable, fun, and self-sacrificing. The young rabbits are especially enjoyable as they tackle every obstacle and every foe with great fighting skills, hearts of gold, and a little bit of magic. The villains are despicable through and through and easy to dislike. The plot keeps moving at a brisk pace but somehow manages to keep readers guessing at what will happen next. Parents, if you’re looking for a book that will make your young boy or girl want to read, this it. His bio says that Mr. Baumann has four kids. I can tell, after reading his book, that this is one author who has learned a few things about what kids want in a story. With Venom Wars of the Desert Realm, he has successfully incorporated his knowledge into a great book, soon to be a great series.

“The brethren triad, with hearts of gold, will fight to regain what the evil ones hold. With tools from the north and a shell from the line, paths guided and guarded by nature divine.” Venom Wars of the Desert Realm by Michael C. Baumann starts with a rather grim chapter, as the eagle king Aridin and his wife Sparra are attacked by Eelion the snake and his minions. They take the couple’s unborn prince, the Oonakestree, to fulfill the Venomous Ones’ dark prophecy. If not rescued, the Oonakestree will be corrupted and will reign in the Desert Realm with cruelty. However, all is not lost, as the Old Poem has spoken of three hare siblings who can save the prince; Nick, Cade, and Sam.

The story concept slightly reminds me of The Jungle Book’s Law of the Jungle and the premise has the prerequisites to offer young readers a solid epic fantasy; good versus evil, prophesied young heroes and an epic quest to save the world from evil times. Great world-building is not easy to create, particularly in the fantasy genre, but Baumann deftly incorporates elements that we are already acquainted with in the real world. As a result, navigating through the intricate law and system of the Desert Realm, the landscapes, the magic and the history is flawless as familiarization comes easily. The eye-catching illustrations by Keira Negali enliven the story even more and the characters are highly memorable. Nick, Cade, and Sam portray the strong bond between brothers. Honu the great tortoise is depicted as the wise mentor against the evil ancient lizard Hillmaken, who wants nothing more than to change the Desert Realm according to the Venom ways. Olivia the owl, a mother figure to the orphaned young heroes, shows tremendous courage during hard times and is my favorite character. Overall, Baumann’s highly engaging Venom Wars of the Desert Realm is a wonderful adventure for young readers.