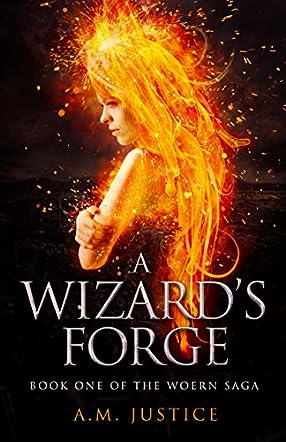 I have danced tango beneath the wings of angels, played hide and seek with harbor seals, and sought distant galaxies from dusk to dawn. It’s been a while since I’ve donned my tango shoes, but I still scuba dive and star gaze whenever the seas are calm enough and the skies dark enough. Hiking to isolated swimming holes, exploring ancient cathedrals, and dining with friends are among my favorite things, but I really love sitting with a cat on my lap while a beloved movie plays on TV.

I live in Brooklyn with my husband, daughter, and my cats, but I like reading and writing stories about somewhere else--another time, another place, far from everyday existence. I usually write about lonely people in very dark circumstances, but there's almost always a little light near the end.

A Wizard's Forge by A.M. Justice is the first book in The Woern Saga, a fantasy that has elements of a thriller and sci-fi beautifully knit into its fabric, a compelling tale of war, kidnapping, revenge and redemption. Many years ago, a crew of explorers got stranded on a faraway planet and formed a civilization of their own. Over the years, there have been wars, marauders, slavers and warriors. The young Logkeeper, Victoria, falls prey to kidnappers who sell her into slavery. As a slave, she experienced all forms of torture, including sexual abuses and other forms of psychological trauma. She was named Kara by her ruthless Master, Lornk Korng. When she successfully escaped, she did so with a vow to avenge herself. Would she get her chance for revenge?

A Wizard's Forge is a masterpiece and readers will love the way A.M. Justice explores her characters. Victoria is very compelling. Her experience of slavery completely transforms her and she develops a powerful zeal for revenge. But there is something else that happens to her — she loses the courage to love because she is continually haunted by the gruesome experience of being held prisoner and violated. Her decision to save the prince when he gets captured is an act of bravery that marks a turning point in her journey towards self-giving and inner freedom.

This is a wonderful tale with a mesmerizing setting and a fantastic plot. The author has a powerful imagination that brings to life actors that readers can easily relate to. There is a lot of action throughout the story and it reels with great intensity. The complex, intricate plot will have the reader turning the pages. This is one of those books that keeps readers awake into the late hours of the night. It is spellbinding.

A Wizard's Forge by A.M. Justice is the first book in The Woern Saga and tells the story of Vic(toria), who has just finished her training to become a log keeper. The story takes place on a planet very much like Earth, but far away. There are two different belief systems: one group believes that a spaceship called Elesendar crashed on the planet and the people on the planet are the descendants of the crew. The other group believes Elesendar to be some sort of god and that everything else is just a myth. Vic is part of the first group, and her job as a log keeper would have been to preserve the log of the Ancients. But before she can start with her duties, she is kidnapped and sold as a mistress to a man who keeps her in the room of a tower. She is not allowed any clothing, and her master tries to seduce her mind and body to make her fully his. When she manages to escape through a rather fortuitous event, she finds herself in a position where she soon gets the chance to walk the path of revenge. It is a path that leads her down a challenging road on which she develops into a stronger woman and discovers that she has special powers. Powers that can ruin or heal the society she lives in.

Reading A Wizard's Forge by A.M. Justice was a very interesting experience because it wasn't quite predictable what Vic would do next. And why. Her soul has been damaged to an extent that is hard to understand unless you've ever been in a similar situation, but the author does a good job of getting the internal conflict in various situations across. Vic does not often react in a way "normal" heroines would do. The world of this novel in itself is interesting as there is a clear conflict between people who believe in Elesendar as a spaceship and the ones who believe in a god and see the stories of Elesendar the way we see Aesop's fables and the myths about the Greek gods, for example. I enjoyed getting "lost" in the world of Vic and, thanks to the writing style, this was an easy thing to do. It is an excellent read, with a good amount of exciting passages, some plot twists, interesting characters, and plenty of enjoyment.

A Wizard's Forge - Book One of The Woern Saga by A.M. Justice is something new! A wondrous tale of many aspects of a personality changing, woven with delicate fibers into an enchanting tale of passion, loss, fear, injustice and courage. The cover of the book is exciting and glows with radiating energy, certainly attractive. The formatting of the book is good, and if there are any errors in syntax or grammar, they are unnoticeable. The length of the book is just right for the multi-scenario novel of science fiction and fantasy it is, while the flow of the story is seamless, even as it creates new visions as it zips along. The story is set in the future where, many years before the events described therein, a gigantic spaceship, the Elesendar, carrying human settlers through hyperspace to settle in another planet, is damaged. Three thousand years pass, but the Elesendar’s disabled drives cannot be repaired and it continues orbiting the alien planet while its passengers and crew migrate to the planet, looking for ores and settle there.

A.M. Justice has created well defined, strong and memorable protagonists. The principal protagonist is a young woman named Victoria, who has just qualified as one of the youngest ever Log Keepers of the town of Ourtown where the Ore-seekers had settled in the northern steppes. There were big cities in the south by then. The high seas are ruled by the dreaded Caleisbahnin—merciless pirates and slavers. Vic's fortunes change and her destiny takes her to a new land against her will, a terrible enslavement to the horrific Lornk Korng, his clueless son, Earnk, and an incredible escape. Vic meets extraordinary people like Ashel, who had given himself to music, and Bethniel, the princess, and Geram, who communicates silently by mind-speech. Vic sees great cities like Traine, which is gorgeous to behold. The tale carries her to lands of magic, war and battles with incredible situations, leaving a reader breathless. Vic acquires fantastic skills that carry her to an awesome finale to exact revenge on Lornk, who still rules some inner part of her being in a psychological sexual enslavement. A Wizard's Forge is thrilling and well written in a style calculated to rivet the attention of the reader. A shining 5 stars is what this book deserves!