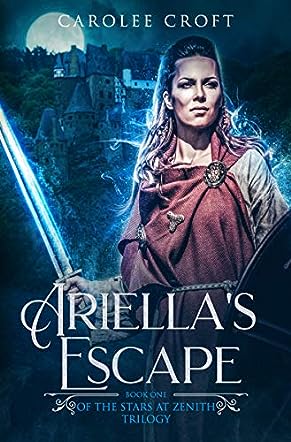 Enchanted by romance on page and screen, I have always tried to write my own versions of the perfect fairytale. No matter whether the story takes place in Ancient Rome or on one of the moons of Jupiter, romance always beguiles and charms us with its fairy tale magic. My first inspiration to sit down and write came from watching the movie The Princess Bride.

This was a “modern” fairy tale with plenty of action, humour, and of course, true love. I resolved that my stories should have the same light-hearted, fun, and romantic spirit.

As for real life… I believe I may have already found the man of my dreams, but I still haven’t found the dog of my dreams. I love traveling around the world and tasting chocolate in all its different forms.

Ariella's destiny had been written in the stars, not that she was aware of it, but other more scheming and unsavory characters were. She had been entrusted with a great responsibly. She was the Baroness of Leduryon. There were richer and more influential people who could have made the journey as the envoy of Queen Esclaimonde, those with bigger armies who could negotiate peace, yet there she was. What she hadn't expected was the scheme of those she had journeyed to meet, nor the handsome slave in the bedchamber who made her want to risk everything to be with him. While they slept, murder was afoot, and the once amenable king is replaced by his hostile son, forcing Ariella to flee or be killed, but she doesn't run alone. Danger lies at every turn, and perhaps the most crushing of all is the jeopardy her heart is in when she discovers the truth about the slave she so quickly came to love.

Ariella's Escape (The Stars at Zenith Book 1) will transport you into a thrilling world of romance, warfare, prophecy, magic, and secrets. It is a perfect erotic romance with a strong foundation for what promises to be an amazing story. I can't wait to see who the wild star will be, although I have some ideas if they are in the cast of fantastic characters met to date. Carolee Croft writes with a grace and poise perfectly suited to a well-constructed romance. The sex scenes are well scripted, passionate, and immersive but never vulgar or crude. The story ends at the perfect place, tied up in its own way with so much still looming on the horizon. I really enjoyed losing myself in this world and eagerly await discovering where the next installment will take us.