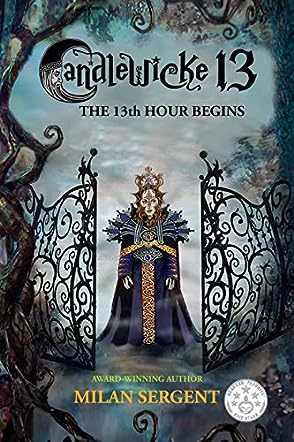 Milan Sergent studied creative writing in college and began writing the Candlewicke 13 novel series in 2007, a year after featuring some of the series’ characters in his solo art exhibition, Outsiders and Apparitions, near Rockefeller Center in New York City.

Sergent’s Candlewicke 13 and the Tombstone Forest won the Readers’ Favorite Finalist Award in the Children - Fantasy/Sci-Fi category as well as the Book Excellence Award Finalist – Fantasy.

An artist and poet since adolescence, a few of Sergent’s poetic works were published in Scarlet Literary Magazine. He lives with his wife, Multi-Award-Winning Author and Poet Beatrice H. Crew.

To learn more about the author or view the illustrated companion guide to the Candlewicke 13 series visit www.milansergent.com. While there, join the mailing list for important news updates and notifications about future novel releases.

Candlewicke 13: The 13th Hour Begins by Milan Sergent is Book Four of the Candlewicke 13 Series. Valor McRaven accepts that he is a peculiar witch but the fact that he has never come of age has thrown him, especially after it puts him and Doomsy Gloomsy, his sister, in danger. The Grim Warlock’s desperation grows stronger and everything is about to change for Valor’s country, an enchanted place deep within the Bermuda Triangle. Valor has a major job on his hands – not only does he need to take over running his Mystic Steeples coven, but he also needs to salvage his sorcerer’s coven, a well-kept secret, all while trying to save himself and those he holds close. If he cannot succeed, the dark witches will force him to join their nocturnal world.

Candlewicke 13: The 13th Hour Begins by Milan Sergent is the fourth book of this truly mesmerizing series, continuing as we follow Valor and Doomsy Gloomsy deeper into their own story. This book follows all the others before it – a well-written sequel, a fascinating story, and a fabulous plot. That’s not to forget the characters; their development continues in this fourth book as the plot gets darker and the action continues. And these are action-packed books from start to finish. I would not recommend that you even attempt to read this as a standalone story – you must read the entire series in order, not least because this one, like the others before it, contains clues hidden throughout and a little bit more of that fascinating Encyclopedia Hoopenfangia. This is just another excellent addition to the series, and I can’t wait for the next one.

Candlewicke 13: The 13th Hour Begins is another fantastic adventure in the Candlewicke 13 series penned by author Milan Sergent. We are back with our gloomy yet glorious fantasy saga as Valor McRaven continues his adventure in this fourth epic-length and highly immersive novel for young adults and fantasy-loving adult readers alike. After discovering the shocking truth about his family and about himself, Valor edges ever closer to the vengeance of the Grim Warlock. A new quest sees him and his sister Doomsy Gloomsy relying on the coven at Mystic Steeples to fight the good fight, even as the darkest group of witches encroach on Valor and bring night with them wherever they go.

I have adored this series from the very first novel, and it’s clear that author Milan Sergent has a fantastic sense of storytelling that spans not just each individual book, but the build-up of the series as a whole. I love the expansion of ideas throughout the story and the little clues from previous books that are picked up here and finally unveiled. As always the precocious little Doomsy Gloomsy steals my heart with her witty dialogue and her bitter-sweet nature, but I was also impressed with the growth in Valor as a central hero and his realization of the changes and discoveries he’s made. It lends a powerful realism to the heroes at the center of this truly fantastical fantasy creation, and overall I would highly recommend Candlewicke 13: The 13th Hour Begins as a stunning continuation to an already superb series.

The 13th Hour Begins by Milan Sergent is the fourth book in the Candlewicke 13 series. Valor has accepted revelations that have changed his life and he’s since come to terms with never coming of age. Valor and his sister are faced with a new danger just as his country is experiencing an event that could change everything. As incidents begin to occur all around him, affecting those closest to him, Valor is pushed in a way he has never been before. Events spiral around him as he goes between control of his coven at Mystic Steeples and attempts to mend matters with the coven of Sorcerers, all while facing temptations into darkness.

The world of Valor continues to expand as Milan Sergent pulls you into the next adventure as Valor learns more about his destiny. This world continues to be an amazing blend of grim, melancholy, and whimsical with unusual creatures and a unique setting that gets better with every installment. Every detail, from animals to petticoats, is fitted to the delightful setting which helps bring the world to life. Sergent excels in creativity with rhino-crested bawdy beetles to attire, spider-webbed petticoats, and padded coffins. The world twists darker elements into a charming whimsy with this adventure featuring vanilla-scented fog and candy-cane trees. Valor’s journey this time around adds another notch in his hero’s quest as he continues to explore who he is and what he’s capable of achieving.

The characters continue to grow with each on their various paths and each having prominent moments throughout as they work together during a time of distress. Doomsy Gloomsy continues to be a truly original character as she keeps seeking out her identity such as her search for her parents and helping out Valor when he gets into trouble, which roots her journey into one of exploring her purpose. The story is character-driven which sees each of your favorites finding more about themselves with every fun new twist and turn. Sergent provides plenty of surprises throughout the plot with chaos, danger, humor, and delights that find the characters facing possession, prophecies, wiggiwamis, and threats. The 13th Hour Begins is another creative and original adventure for the series that continues to show Sergent's amazingly grim world that you’ll want to be a part of.

The 13th Hour Begins by Milan Sergent is book four of the young adult epic fantasy Candlewicke 13 Series, preceded by book one, Curse of the McRavens, book two, Candlewicke 13 and the Tombstone Forest, and book three, Under the Crescent Moon. Book four picks up with Valor McRaven coming to terms with the static nature of age as a witch but is soon confronted with the more immediate concern of the possession of creatures and his own new appetite for something terribly unappetizing. When a corrupt system of testing, the loss of a friend and a few foes, and the life or death questions of the Grim Warlock float around like witches in a river, Valor, Doomsy Gloomsy, Aaron, Rose, and those allied with them and the coven must somehow come up with a plan to remove the Great Deception. All the while, executions, killings, and distrust run wild, spells and necromancy be damned.

Milan Sergent rings in another fantastic installment of the Candlewicke 13 series with The 13th Hour Begins. The writing is exceptional, delivering the usual fare of crisp, witty narrative and dialogue that is occasionally lilting. “But not the immortals who didn’t swallow a Mystic Key. They are asleep, you see?” The clues are really creative, my favorite being the clever foretelling in a pair of broken butterfly wings. The characters continue to develop, becoming all the more dimensional even though they are already fully fleshed out at this point. Doomsy is hilarious in her mannerisms and devotion, and Aaron sounds like he's a thousand years old instead of only a couple hundred. I just adore this series and everything that continues to be poured into it and would give it a whole bucket full of stars if I could.

Candlewicke 13: The 13th Hour Begins is the fourth book in the Candlewicke 13 Series by Milan Sergent. The adventures of Valor McRaven continue as he starts to understand the world around him and his responsibilities. Valor is not like other people in his community. He has a secret coven of sorcerers and he also has a coven at Mystic Steeples. While this is unusual, it is bringing him and his sister Doomsy a lot of unwanted attention. When bad things start happening around him and his family, Valor knows he has to do something before some serious damage is done. Being the Knight of Night is not easy, he has to battle the stigma and make sure he keeps his mind pure of evil. Can Valor keep his loved ones safe? Or is this finally something that Valor cannot get out of? Is this the end for Valor?

What can I say? I love this series. The illustrations are brilliant in bringing the scenes to life. As expected of Milan Sergent, the narrative flows beautifully and is intricate enough to blow my mind. Valor has grown up to be such a reliable and entertaining character. He has his own quirks now and his own way of speaking, his personality traits have grown with him and are instantly recognizable. There are layers upon layers of complex plot in The 13th Hour Begins and I loved uncovering each of them. Author Milan kept the suspense going; he had me wondering about what will happen next to Valor and how he will stay safe in this mess. I was intrigued by the secret coven he had and why he kept it a secret. I wanted to understand his motives and loved every moment of it!